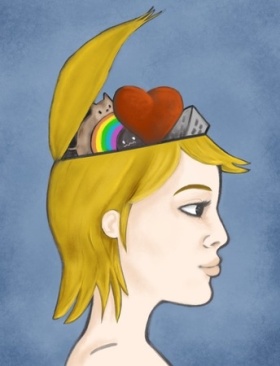 What things in fiction, big or small, really do it for you? Tropes, characters, premises or details that you enjoy so much you’d auto-buy a book or stick with a really bad movie because of them?

A couple of weeks ago I listened to Writing For Your Id, a workshop presented at this year’s RWA National conference by Dr. Jennifer Barnes, a psychologist, cognitive scientist, and YA romance author. I’m super-grateful to 8 Lady Jeanne for recommending it.

The first part of the presentation, which would have been worth the price of admission, was that certain universal pleasures have become hard-wired into our brains, and encountering those treats when we read gives us a deep-seated hit of happy. Stories or scenes depicting sex, touch, beauty, wealth, power, competition and danger push our pleasure buttons. Different genres are associated with different pleasures, and the workshop offered suggestions about different ways to create pleasure-centric stories and to work with and against the typical pleasure buttons.

Lots of food for thought there, but what really resonated with me was the second part of the presentation: that you make your stories distinctive and memorable by adding in to them stuff that you, the writer, personally really, really like.

The idea is to develop a list of all the things that do it for you and use those things to bring excitement to your writing.

Work out which pleasures recur. Which ones you’re strong on and vice versa. And if you’re not looking forward to writing, get yourself in the mood by adding in something from your Id List.

Dr. Barnes said she has a list of more than a thousand items. I just made a start on mine, but here are a few things I came up with.

Sensible, smart, plain heroines who get the hot guy
Especially the overlooked bluestocking sister with a drop-dead gorgeous sibling.
I’d put Lizzy Bennet top of this list—Jane is beautiful, but Lizzy’s smart and interesting. Or quiet, competent Mary Challoner from Heyer’s Devil’s Cub.

Heroines who shoot the hero
That would be Mary Challoner again. And Jessica from Lord of Scoundrels. And Sophy from The Grand Sophy (well, she shoots a friend to prevent the hero from challenging him to a duel, but I think it counts).

Characters who are more than they seem
Many Ilona Andrews heroines, frex the Kinsman sci-fi novellas: a young woman with a rare and deadly talent whose existence has been expunged from her family records so that she can carry out assassinations on their behalf; another with psychic superpowers who’s on the losing side of a war and has to conceal her abilities and her military history to start a new life as a civilian refugee. Or Hugo from Heyer’s Unknown Ajax, who chooses to let his snobbish aristocratic relatives believe he’s the penniless weaver’s brat they assume him to be. Also superheroes, shapeshifters, pretty much any character with an alter ego.

A good con
Phoebe, the heroine of SEP’s It Had To Be You, bluffs her way to a new stadium contract for her team the Chicago Stars. Hugo, again, at the end of Unknown Ajax, plays his aristocratic relatives like marionettes in a glorious deception that outwits the Customs Land Guard and saves the neck of his reckless young cousin Richmond.

I could go on, but you get the idea.