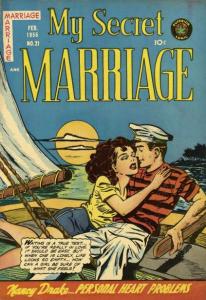 Dark blue love, vs. happy pink love? The colors of the sea reflected in the color of his eyes? (Image via Wikimedia Commons)

There’s a very interesting review of Isn’t It Romantic with Rebel Wilson in Vox this week. Rebecca Jennings talks about how the movie uses dark, dull imagery pre-meet, then the film turns into Living Color with all the flowers and hearts in the world, crammed into the New York setting.

Of course, Isn’t It Romantic isn’t the first film to use darkness and light. You can find plenty of articles about this little trick, and it’s as old as color film itself. Notably, The Wizard of Oz was filmed in black and white while Dorothy was in humdrum old Kansas, but the images turned into gorgeous color when she was transported to magical Oz.

And, while that particular trick was part of the film, the original book also used color to good effect. “The Emerald City” invoked specific images for readers, and the Yellow Brick Road would have been not as effective if it had been the Shiny Brick Road.

It’s a nice reminder for us to use color in our stories. (It probably makes doing the cover a little more specific, too.) How do you use color in your stories? Or, do you have a story that used color to invoke feelings, emotions, themes and ideas very well?

As writers, we’re taught that a story rightfully begins with an inciting incident; an event that changes something for our hero/heroine, throwing them off their traditional path and setting everything in motion.   It can be as simple as meeting a cute guy in the bar, the death of a family member, or being transferred to a new job, or more complex, like being transported into a whole new world.  Typically, the inciting incident is something that happens to the hero/heroine, rather than something they actively do.

Simply put, before the inciting incident there is equilibrium.  Afterwards, the balance has been upset and there is a problem to be solved. END_OF_DOCUMENT_TOKEN_TO_BE_REPLACED