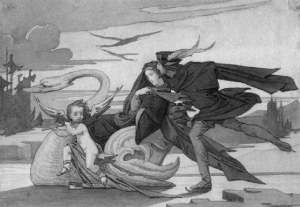 It was one of those beautiful February days – the sky was blue and the ice on the rink was rock hard. Olivia took another leisurely turn around the pond, idly wondering if Jack was ready to go inside yet. Jack zoomed past her, a vision of gracefulness in black leggings and a black turtleneck, his black hair in winter spikes and roses in his pale cheeks. At the far end of the pond, just where she could best appreciate his athleticism, he jumped and spun, drew a heart in the ice, then zoomed around again in long, lazy strokes. He was like a Mercedes on ice – he didn’t seem to be putting in any effort, but in two heartbeats, he was behind her, slowing down in a spray of ice crystals, then gently taking her hand.

“All right. Skater’s waltz?” He kissed her nose, and pushed off, pulling her behind him while humming a ridiculously resonant version of “The Blue Danube”. It had been almost an entire year since they met, and Olivia was as crazy about him as she was when he first showed up on her doorstep. Always the showoff, he turned and skated backwards, now holding both her hands, dazzling her with his smile. And that was the reason neither of them saw the snowfairy in her tiny sled drawn by a floppy Shih Tzu, barrelling across the pond and right into their skating path.

Everyone went down in a tumble of arms and legs, with the snowfairy winding up on top, her sled underneath, and her doggy spinning around on the ice like a furry Roomba, barking furiously at the outrage.

“Who?” Jack and Olivia asked together.

Olivia did the mental calculation. Frost’s River was a mile and a half away; she wasn’t sure how long that was in puppy-strides. Mitzi the Shih Tzu didn’t look like an “as the crow flies” sort of mount. Maybe Olivia could hide the snow fairy in her ski jacket?

Jack said, “You’re Samantha, aren’t you? One of the Blue Hill fairies?”

“Don’t worry, Samantha. Get on your trusty steed, and we’ll do our best to hold the cupid off.”

The tiny fairy fluttered up to kiss Jack on the cheek, then rushed to the dog.

“My darling, let’s pretend we don’t get along. We’ll befuzzle him with bullshit, and then argue as long as we can. A cupid can’t resist two opposites.”

“Well, it’s not like cupids can do that much harm, can they?”

“Those arrows sting, especially if you catch one of those darts in your eye. Try to avoid getting shot, if you can. If we do get shot, though, we already like each other a great deal, so it could just be a very interesting evening until the cupid’s aphrodisiac powers wear off. It shouldn’t be too much of a burden!” Jack had that glow in his eye that promised a very good time indeed. Olivia felt her very core warm to the thought.

They didn’t have to wait too long. There was the cupid, following an erratic flight path, humming a French love ballad and stopping to coo, “Sammy, Sammy, Sammy, you know I’m going to get you!” What an annoying little putto!

“Get ready,” Jack murmured, then in a loud voice said, “Why didn’t you watch where you were going, you horrible hag? There was plenty of room to go around!”

Olivia untangled her legs quickly, and hid the tiny sled in her coat. “Why didn’t you watch where YOU were going, you stupid jerk? Oh, yeah, you were skating backwards, even though you knew there was another skater on the rink.”

The cupid stopped, intrigued, and hovered, his arrow knocked into the bow, but pointing down at the ground for the moment.

Jack got up, and extended a hand to help, then jerked it back as Olivia reached for it. “Hah! You heard me tell Petersen that I was going to the pond Saturday afternoon. You could have easily come tomorrow.”

“I’m BUSY tomorrow. Petersen was supposed to meet me here – I didn’t hear anything about you being here, or I would have stayed far away. Now listen, I was here first. Git!”

From the corner of her eye, she could see the cupid still hovering.

“Don’t look,” Jack whispered. “He’s interested.” In his theater voice, he boomed, “Petersen is a wolf! The last person you should be out in the woods with!”

Oooh, nice. Olivia appreciated the extra hook, and it looked like the cupid did as well. It flew a little closer. “I don’t see that you are any better,” Olivia shouted. “Why, I wouldn’t trust you as far as I could throw you across this pond.”

“Oh, you’d like that, wouldn’t you? Curl me half way across the pond and watch me crash into the snowbank. I hope you catch your death of cold out here, you harpy!”

“Why, you!” Olivia clutched the velvety stretch fabric of his turtleneck and made as if to toss him across the pond. He was a head taller than her, but she had an advantage in the center of gravity department.

That did it. The cupid giggled and knocked two arrows into his bow, then let them fly. Olivia pulled Jack down to the ice, making it look like a stumble, then buried her face into his turtleneck to muffle her laughter. Seconds later, the sting in her left buttcheek made her jerk up in outrage, before she melted into a gooey mess of lust and happiness. Apparently, Jack had also been hit, because he dragged her back down to the ice, and covered her with kisses.

It felt really weird, this artificial lust. It was like a layer of plastic wrap over her real feelings, with the red lusty emotions sliding around like homemade strawberry jam on top. Not being able to access her real self was actually kind of a bummer, even though the hot, electric sensations were pretty cool. It was like a lunch of Pop Rocks. All fizz, no substance.

They had rolled half way across the frozen pond, when the feelings suddenly cut off. “Ouch, stop kicking me, you stupid little putto,” Jack said. He grabbed Olivia’s scarf and captured the creature.

The little angel baby screwed up his face, then howled. “You do see me!” He struggled in the scarf. “What have you done with Samantha? That’s her sled falling out of that lady’s jacket!” And so it was – in the tumble and twirl, the poor sled had been crushed even more, and the debris was scattered across the ice. Olivia sat up and shook a lonely sled runner out on the ice.

“We’ve done nothing to Samantha, you silly twit,” Jack said. “We’ve given her time to make it to Frost River, I think. I’ll hold you another five minutes to make sure she escapes. If it weren’t for your reckless pursuit, she never would have had the crash.”

“Crash?” The cupid’s brown eyes welled up with tears. “Was she all right?”

“No thanks to you. The girl didn’t want to go out with Frank. Why push it?”

“Aw, I thought if she spent some time with Frank the Beast, she wouldn’t find John Cupid so bad. I’ve been in love with her since the day Mom assigned me here two weeks ago, but she doesn’t even give me the time of day.”

Olivia spoke up. “It’s really up to her if she wants to speak to you or not. So, your plan was to shoot her with poison, set her up with a bully, and then rescue her?”

“Well, when you put it that way, it doesn’t sound so hot. But it’s worked before!”

Jack looked stern. “Abuse of your powers for sexually harassing co-workers. It may have worked before, but it’s never been cool. I think I better have a talk with your supervisor.”

“No! Don’t tell Mom! She’ll put me back on basement duty.”

The little cupid’s pleas failed to move Jack, and Olivia wasn’t impressed with his argument, either. Sure, the idea of little guys flying around causing love at first sight was a cute one, but with little powers came at least a little responsibility. There had to be some rules.

Jack sketched out a little sigil in the ice with his magic, and there was a great rumble from the depths of the pond. The ice grew a soft pink, like dawn’s rosy fingers, and through the ice (but without cracking it), Aphrodite in all her glory rose on a half shell, like a hologram.
“Yes?” Her blue eyes, without pupils or markings, fell on Jack, then Olivia, and finally the goddess saw John Cupid. “I should have suspected it’d be John,” she said and sighed.

“Basement duty, for you, young man. And no internet for a month! After that, we’ll work on community service.” She turned her eerie, featureless eyes back to Jack and Olivia, and Olivia snuggled up closer to Jack. “I’m sorry he’s been a nuisance here. But he will learn.”

Without waiting for a reply she and her son sucked up into the sky, leaving a trail of snowflakes drifting in the air.

“Love Magic,” Jack muttered. “Such a messy department.” He shook out the now-empty scarf and draped it over Olivia’s head. It smelled of roses and orange blossoms. There was a sharp yapping sound, and Samantha and Mitzi were sliding back across the ice toward them.

Samantha said, “I heard John Cupid got sent back to the island.”

“Bad behavior needs to be reported,” Olivia said. “It wasn’t Jack’s fault – Cupid’s supervisor was the one who decided to recall him to headquarters.”

“Yeah, I suppose,” Samantha said. “But it still kind of sucks. There aren’t a lot of us little folk here. And what if the next cupid is worse?”

Jack nodded. “We’ll deal with that if it comes up. Why don’t you head back? And be sure to report your sled to the motor pool. I think we can get you a new one before the weekend is over. They had one in the Toronto office.”

Samantha frowned and mounted her Shih Tzu. “Well, all right.” And they galumphed back toward the east.

Olivia turned toward Jack. He had that glum look that happened so often when he had a creature relations problem at work. “Well, I think you did the right thing, Jack.”

“Probably.” He sighed, and tucked her hand into the crook of his elbow. “You must be freezing. Shall we go home?” They took off their skates, and walked home through the wood, arm in arm.

4 thoughts on “Michaeline: Olivia, Jack and the Stupid Cupid”