A few weeks ago, fellow Eight Lady Jeanne shared with us a video of Diana Gabaldon’s cold start process…in other words, how she turns on her writing mojo when she’s stuck. Turns out, in this example, she used a Sotheby’s catalog to simulate her creativity.

Diana’s cold start process is vastly different from Jeanne’s, which gave her to think it would be interesting (and perhaps helpful) if all the Eight Ladies shared how we get going when the words just won’t come. So, starting today, for the next week, we’ll share the processes we use when we need to get writing. (No writer’s block for us!)

My cold-start approach is two-fold. First, I re-read. If I’m attacking a new scene, I revisit the scene before the new one (or if I’m in the middle of a scene, the beginning). However, if I’m in two POVs and the scene I’m trying to write is in a different POV than the one preceding it, I find the last scene in the current character’s POV and read it, as well (mostly, this is to make sure I get into the right character’s head).

When I read, I make notes in my trusty notebook. Questions I ask as I read include what mood were the characters in at the end of the last chapter? What’s changed? What mood should they be in based on what’s just happened? What needs to happen next? Where should the characters be emotionally after I write this next scene? What Easter eggs do I need to hide? What do I need to circle back and address? You get the idea.

Sometimes, this is all I need to get writing again.

More likely, I need to go into handwriting mode. In the digital age, many people pooh-pooh the idea of writing their book by hand (so slow! so messy! hand cramps!), but studies have shown that different things happen in the brain when you put pen to paper versus your fingers to a keyboard. In fact, several novelists/screenwriters such as Quentin Tarantino, Joyce Carol Oates, J.K. Rowling, Vladimir Nabokov, and Jhumpa Lahiri all write their first drafts by hand. Their reasons vary from needing the physical connection to paper to touting more creativity to focusing more on writing and creating story and less on cutting/pasting/moving text around.

According to this article in Huffington Post, writing by hand stimulates the brain in different ways than typing, generating more ideas and improving cognition. It also slows you down, leaving more time for brainstorming, which naturally requires time and deliberation.

Hand writing also leads to fewer distractions. No email messages popping up in the middle of your screen, no IMs, no tweets, and no bings, dings, or bleeps. However, some of the distractions that DO occur when handwriting–daydreaming and doodling, for instance–can actually lead to more ideas and creativity (which is why some writers prefer to do their first drafts by hand).

As for my cold start process, when I put pen to paper, my goal is to write a Cliff-notes version of my next scene. If I’m not sure exactly where to start, I write down some of the questions I listed above, but with answers. A few times, the question has been as simple as, “Do I need this scene?” If I can’t come up with a compelling reason to keep it, I toss it and it’s amazing how fast that will get me unstuck. You can see below the notes I took recently when I was stuck at the beginning of a scene. 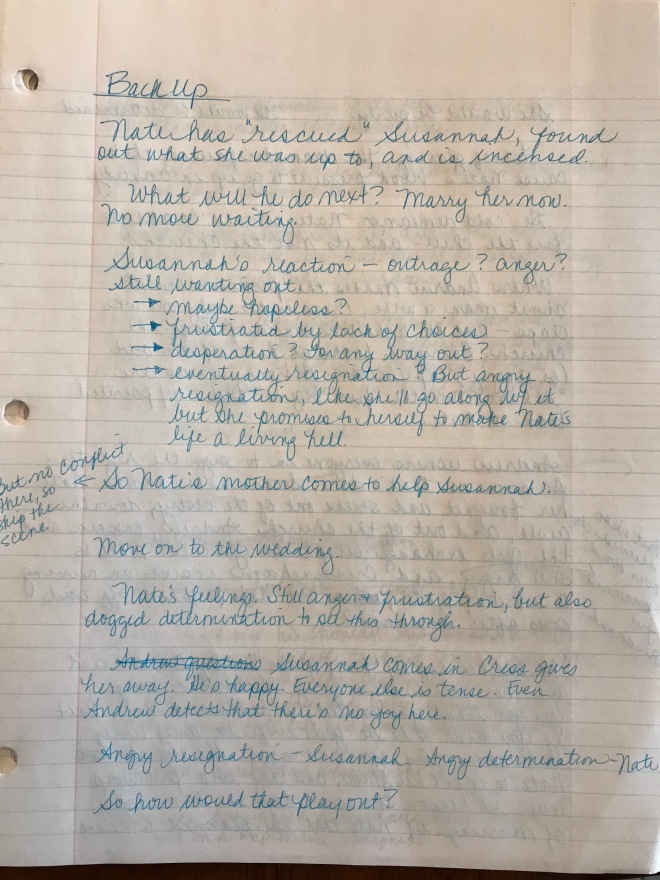 Questions I ask myself and notes I take when I’m stuck. The “Back Up” at the top is literally me backing up and looking at what needs to come next from a fresh perspective. And note my sidenote — no conflict, so skip the scene entirely.

Sometimes, when I’m writing by hand, gems of dialogue present themselves and I jot them down, whether it’s a single line or an entire conversation. Sometimes I get insight on things that need to happen later (or changes I need to make to previous chapters) and I write them down on another page. Most of the time, I’m able to get myself going enough that I can sit at my computer and start actually writing the chapter.

The notes I take by hand can be anywhere from a few paragraphs to a few pages, but using pen and paper has always gotten me writing again. Every. Single. Time. It’s my go-to when I can’t think of what to write.

So…do you have a cold start process? Have you tried mine (or some variation of it)? How has it worked for you?

Be sure to check back each day for the next week to see how the other Eight Ladies get the creative juices flowing. And keep writing!