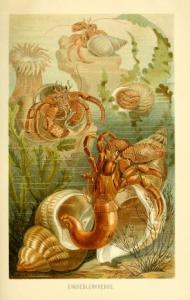 And so, Micki came out of her shell and waved hello to the others. (Via the Internet Archive)

You never know where a new direction is going to come from. Could be north, could be east . . . could be straight up from the ground, or pouring down from the heavens.

In my case, an old friend sent me an email out of the blue regarding a writer’s conference in Japan. I suspected there were a lot of writers in Japan (there certainly are a lot of bloggers!), but I felt like we might all be like hermit crabs, hiding in shells of English Teaching or maybe IT Endeavors. You really can’t tell who is a writer and who isn’t just by sight.

But now, the internet is a miracle for peeling off those shells and saying, “Hey! Here I am!” Some savvy person got a notice for the 2018 Japan Writers Conference into a little newsletter based in Sapporo, and my Sapporo-based friend sent it along to me (the hermit crab by the sea). And then when I went looking . . . wow! The conference has a social media presence! Here’s the tweet about the conference, and there’s a Facebook page, and there could be more. (-: Not in the first two pages of Google hits, but still. Their Social Media Presence Can Be Felt.

Looking at the tweet also provides a lot of information – for example, information about the Twitter accounts of 14 people who liked the tweet. One of them has written about mermaids in Lake Michigan, for goodness sakes! (I’ve got a mermaid seeking revenge in a fictional lake in upstate New York. Writer-soul mate? Maybe. At least, I’ll follow and see what happens.)

I don’t know if I’ll be joining them in Otaru this year, but it’s just exciting to know that there are fellow strivers in the room. I mean, I guessed. Now I know.

What’s your local writing scene like? What do you get when you google “My Area Writers”? Is it all black and white photos of writers dead and gone? Or is there a living presence of scribblers like you? Let me know! I’m so curious.