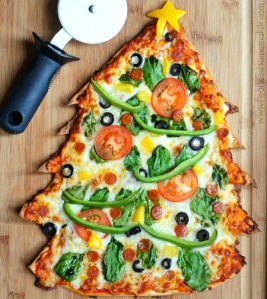 Every year Elizabeth gives the Ladies the words for the holiday writing sprint in advance, and this year the words go up tomorrow, on December 22. As you see, my post runs December 21, and if I wait two weeks to publish my story, I might as well be writing something about Groundhog Day. So apologies all around for jumping the gun. Here’s my story. It’s pretty long—Elizabeth asked for a happy ending, and I had a little trouble getting to it. But I did it, I think, and I used all the words, too. See if you can guess which ones they are.

And if you don’t get to the end of this post, let me say now, happy holidays and best wishes for the new year to all of you and yours!

Botticelli Pizza
For some insane reason, I decided I wanted to throw my parents a surprise buffet party for their anniversary at Christmas. I’d fretted about it for weeks—the menu diary, the signature cocktail, the tiered cake, the special music, the decorations, the tableware, the linens. I’d just started my catering company, and, I suppose, I wanted to show off.

Showing off—yeah, it’s always smart to try to show off on your first gig, in front of family, in December.

Why had my parents wanted to get married in December? Practically on Christmas Day?

The story goes that thirty years ago on Thanksgiving weekend, my dad walked with my mom along the forest path of Lake Mendota and proposed with a solitaire diamond. The snarks in the family said they’d just wanted to get out of the house to avoid all the football games and cousins who shouted at the TV. But my folks were serious, all right. Three weeks later they married in a courthouse, a secret from their families, because, they said, they didn’t want to go to the fuss and bother of a big wedding.

But the subsequent fallout has meant that the month of December has been fraught ever since. Mom got pregnant the first time in March, which meant that Sean was born in December. And so was Caitlin. And so was Harry. And so was I. Trying to get through those four weeks takes one big, loud, exhausting push, like shoving an octet of howler monkeys through the eye of a darning needle. Or something.

But I’d opened my shop and printed my business cards, and I wanted to show them that I could be the best caterer our town had ever seen. I wanted to give them an anniversary party they’d never forget.

They’ll never forget it, that’s for sure.

I blame it on the weather, which is easy to do. The first snowflake fell on the morning of the day before the event. I didn’t worry. I mean, it’s the northeast. It snows. We’re used to it, right?

By mid-afternoon, as I poured whiskey into the nut-raisin filling for the middle tier of the spice cake, the radio news reported three traffic accidents. Still I didn’t worry. Accidents happen, right?

But by the evening of the following day, I was beyond frantic. More than forty inches of snow had fallen. The plows couldn’t keep up. The roads closed, one by one. Restaurants, bars, shops, offices—everything closed.

I’d made it to the venue—the Old Barn, which was, in fact, an old barn remodeled and updated for public events. I’d come over early in the morning with the cake, just barely getting there as I slipped and slid across icy streets. The hired sous chefs and waiters were supposed to arrive in early afternoon with the food and wine. Instead, they called to say they weren’t coming.

The delivery people bearing the tropics-themed holiday decorations—including my favorite, a giant blow-up flamingo in a Santa suit—weren’t coming. The musicians weren’t coming.

Nobody was coming but the guests.

My mom and dad arrived first, driven over early by my brother Harry who owned some kind of giant, super-charged, we-made-it-through-Desert-Storm vehicle. Then the rest of my siblings arrived. Then my uncles Paul, Milton, Bob, Ted, Les, CW, Gordon, and Jim, and my aunts Lois, Agnes, Dot, Nancy, Vera, Fran, Alice, Helen, Thelma, and Margaret. Then the cousins. Then the friends. Then the townspeople. All of whom walked, through deep snow, in howling winds, to honor my parents.

This was supposed to be the catering job where I showed off, and I had nothing to show off. In front of more than seventy people.

I started making calls, trying to find some restaurant, some shop, some grocery story—anyplace that sold food. Nobody picked up the phone. Every establishment had an outgoing message that started with “Due to Friday’s snowstorm, we will be closed….”

“Botticelli Pizza,” a guy said. The voice was very nice, a deep and rumbling baritone. I waited for the message about being closed, but none came. “Hello?” he said.

“Okay, right, well, here’s the thing. I have seventy people at the Old Barn, and the food’s not coming, and the music and the decorations, and the flowers—nothing’s coming! And everybody’s hungry! Can you make pizza for seventy?”

“I can do you better than that,” the guy said. “I’ve got one hundred individual pies right here, right now, just out of the oven, for the holiday party over at the bank, which they cancelled ten minutes ago. Everything’s paid for and going to waste. Will that work?”

“Yes!” I said. “One hundred times yes! Should I pick it up? My brother Harry has a vehicle that can get through Desert Storm, he says, so it should be able to get through this snow.”

“Thank you!” I said. “You don’t know how much I appreciate this.”

Thirty minutes later, a humongous vehicle just like Harry’s pulled into the service drive of the Old Barn and a tall figure muffled to the gills hopped out of the driver’s seat and went back to the hatch. I’d been waiting with my coat on to help unload, which also helped me avoid the questions of my relatives, so I wrapped my scarf around my neck and got out there.

The snow was still coming down hard and blowing around in a fierce wind, so the pizza would be stone cold by now, but it was food and I was happy to get it. The Old Barn had an oven, anyway. It would be like camping with electricity and a roof. Mom and Dad, not to mention the sibs, could make fun of me for the next thirty years. Right now, the pizza guy was saving my butt.

The individual pizzas were stacked in large carrying boxes, and he piled two of them in my open arms. I staggered into the building and unloaded, and he followed me with four boxes more. The crowd fell on us like banshees, but we weren’t done yet—it took two more trips before all the pizzas were unloaded.

When the last trip to the Desert Storm delivery vehicle was completed, I unwrapped my muffler and shook it out.

“You saved us,” I said. “I can’t thank you enough. Stay for the party, or something to eat, at least. We’ve got some great-looking pizza, and everybody will want to meet the guy who saved the day. They’ll figure out games or music or dancing or something. Unless you have to be somewhere, of course.”

The Botticelli Pizza guy took off his scarf and then his square, pilot-style hat with the earmuffs. I saw that he was older than I’d expected. In his thirties, anyway. A very good age. And he had the bluest eyes I’d ever seen. Plus right now, the pinkest cheeks.

“Are you Mr. Botticelli?” I asked.

“I think the only Botticelli in the room is you,” he said.

Okay, that remark was super corny, and if the comment had been unwelcome, might even have fallen into a category of minor sexual inappropriateness about which we’re reading so much these days.

“What do you think about tomorrow?” he asked as we snuggled together under the mistletoe several hours later after the electricity went out.