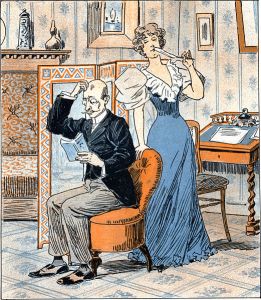 Don’t leave your readers confused! Give them the basic facts up front! (image via Wikimedia Commons)

So, this week I’ve been reading an anthology of gay fantasy romance, and it’s been really good so far. But, since I’m not writing a review but a craft analysis, I don’t really want to name names – I’m going to take a tiny quibble and blow it up large, and see if I can figure out how to avoid it.

The great thing about an anthology is that you get a variety of usually new writers with lots of beginnings all packed in one volume.

The first story had a rocky start. We started in a Chinatown, and I was ready to roll with that – but I didn’t have a good feel for the “when” of the story. Something about it made me think of a Chinatown from around the 1900s; there were no cell phones or Land Rovers to tell me otherwise, and my first clue that maybe we were in the modern world was a burrito in about the fourth paragraph. I remember distinctly thinking, “Would a 19th century copper really know anything about burritos? Well, maybe the author is trying write a very cosmopolitan cop.”

We kept in this twilight Chinatown (which totally was Chinatown! But a kind of eternal, no-time Chinatown) teetering on the edge between 1895 and 2010 until finally in the 13th paragraph, the author talked about a cup of coffee and a female police officer. I thought, “OK, they’d have cups of coffee. They might have lady police. But I think we’re in more modern times.” Paragraph 16 brought tourists (could have happened in 1900; I’ve read accounts), but finally in paragraph 17, the BART (San Francisco’s bus system) appeared, and I thought, “Hallelujah! I know when I am!!”

If only in paragraph one or two, there had been some office workers waiting for the BART, and scattered by the wild chase going on, I would have been able to concentrate on the exciting story.

The author did a great job of creating a physical place or the “where”. The “what” was a chase, which is always interesting when done well. It foreshadowed the “why” by producing an antagonist and a conflict that was about to bloom into bigger conflicts. As for the “who”, it was enough to know that our chaser was a half-fae trying to help dragons get their eggs back, despite natural inclinations that did not include running in the morning, and that person was familiar with many cultures and especially knew this Chinatown. You can’t do everything in 10 paragraphs.

Still, I was thinking 17 paragraphs is far too long to be wondering what era we are in. I got to wondering if as writers, maybe we need to be reporters, and at least make an attempt at providing at least four of the five Ws (who, what, when and where).

Then the third story confirmed that theory. It began with a variation of “Marley was dead” – the famous beginning to Charles Dickens’ “A Christmas Carol”. So, I was firmly set in a Dickensian 19th century England, and every word after did nothing to dispel that theory. The “when” and “where” were established in three words for me, and every follow up word did nothing to make me doubt the illusion I built up. Presenting a dead guy in the very first sentence provides such an intriguing “what” that I was willing to go along with the writer for a few paragraphs to find out what was going on. By the third paragraph, we got the “who” of the protagonist and what and why he was so upset came out directly in the fourth paragraph. The details and the language all confirmed what I imagined from the first sentence, and I felt very safe and secure in the writer’s world.

One note about this story: the love interest doesn’t show up until the second scene, although, in a way, he is definitely in the first scene’s subtext, driving the whole story.

So, I guess add that to your first scenes checklist when it’s time to edit. Do you have the who, what, when, where, and maybe why and how?

I would say it’s not as important. I think there’s some value in “the establishing shot” that gives your reader a tiny, safe ledge to stand on when reading a story. It better be one hell of a view, though, and you better hustle in the protag and an antagonist of some kind in pretty quickly.

I’m still thinking about this. For every rule we set, I’m sure there’s a great story somewhere that breaks it good and hard. How about you? What did you like and dislike about the beginning of the last story you read or wrote?

5 thoughts on “Michaeline: Descriptions in the Beginning”