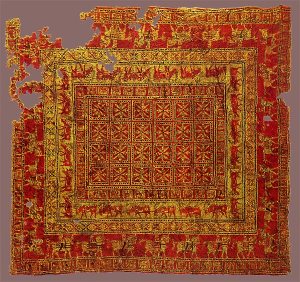 Motifs add interest and rhythm to a work of art, and subtly point out what the important themes are. (Image via Wikimedia Commons)

David Bowie knew a lot about motif. It’s one of the things that made him a great musician, and it also made him an excellent comedian. He knew the power of the call-back, the reminder of what went before.

I’ve found two clips of him with US late night show host Conan O’Brien. (“David Bowie – Late Night with Conan O’Brien 18 June 2002” [anecdote starts about 3:10]) We start out with a very charming story of how his baby daughter discovered the moon for the first time. He repeats the word “moon,” and he says it in different voices as the context changes. And then he starts talking about something else, but Conan brings it back to the moon, and David catches the ball and joins in, like a sort of harmony. At one point, they are both pointing at the stage ceiling, howling, “Moon! Moon!”

Many people claimed that David Bowie didn’t repeat himself, but he did. He was just smart enough to change the dynamics. It didn’t get boring because he did it louder, he did it softer, he surrounded the motif with new information, and made it bigger or made it smaller.

I’m not sure if motif works very well if it’s chosen ahead of time. But I do think we write something, then we write some more, and something reminds of us of a past phrase, and we repeat it, or echo it, and create a doppelganger. We write some more, and repeat it again. There’s something that resonates in our writing soul. We can recognize that repetition, and reinforce it in the later drafts, but I’m not sure if it really works if we say, “I’m going to put a dahlia in each and every scene,” or choose our motifs then build our work. I think we have to see the motifs in a body of work, then strengthen them. We wind up with an army of doppelgangers, subtly pointing out what’s really important about the work.

My second clip (“Conan Remembers David Bowie – CONAN on TBS” [anecdote starts at 2:54]) shows that sometimes fate just steps in and provides a motif for us. The two hams chew the scenery a bit in this sketch. Conan puts David on the spot by asking him to sing a bad song Conan has composed. “It’s in G. You like G, huh?” Conan asks ingratiatingly, strumming his guitar. David replies wearily, “I love G.” He shoots Conan the evil eye. “I live for G.” David barely puts up with singing the horrible lyrics until he gets to the point where Conan steals the lyrics from Space Oddity, and he’s had it. “How about – “ he begins angrily when one of Conan’s strings break. David breaks character, and laughs. “You’ve bust your G-string.” Never mind that it was really the E string (I think). Artistic license. The motif brings things naturally around to the key of G.

By the way, Eight Ladies Writing will be issuing artistic licenses from now until the end of the month. If there’s something in your work-in-progress that you aren’t quite sure whether you should do or not, get in touch with us in the comments below, and we’ll give you a license to go ahead and do it. Some restrictions apply; not to be used in combination with alcohol or prescription drugs. Do not use while operating heavy machinery.

Now, back to your regularly scheduled schedule.