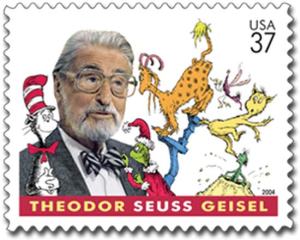 2004 postage stamp featuring Dr. Seuss and some of his iconic characters

Tuesday, March 2, was Read Across America Day, a promotional gambit dreamed up by the National Education Association to promote literacy. March 2 is also the birthday of Theodor Geisel, also known as Dr. Seuss, the children’s book author. In past years, these two events were conflated in a partnership agreement between the NEA and Dr. Seuss Enterprises, publisher of the late author’s estate.

No more. This year on March 2, Dr. Seuss Enterprises said it would stop printing six of Dr. Seuss’s books because of racist and insensitive imagery, and in celebrations for Read Across America Day, the NEA has left out Dr. Seuss’s name to promote books of diversity.

This analysis of Dr. Seuss’s work was first articulated that I know of a few years ago, and at the time, it floored me. As a kid, I loved Dr. Seuss’s work. I reread my favorites many, many times, and I can probably recite a lot of Green Eggs and Ham and The Cat in the Hat by heart. I had no memory of any racist language or images.

Until I read the list of six books that Dr. Seuss Enterprises will cease publishing. Five of them I had not read. The sixth, And to Think That I Saw It on Mulberry Street, I did remember. It wasn’t a favorite. But I do remember those characters who were supposed to be Chinese. They weren’t funny. They were a little scary.

With an adult perspective, definitely racist.

In 2019 the Conscious Kid’s Library teamed with University of California-San Diego researchers to analyze the characters in 50 titles that Dr. Seuss created. In “The Cat is Out of the Bag: Orientalism, Anti-Blackness, and White Supremacy in Dr. Seuss’s Children’s Books,” authors Katie Ishizuka and Ramón Stephens found:

“Of the 2,240 (identified) human characters, there are 45 characters of color representing 2% of the total number of human characters…. Notably, every character of color is male. Males of color are only presented in subservient, exotified, or dehumanized roles…. Most startling is the complete invisibility and absence of women and girls of color….”

Of the 45 characters of color, the study’s authors found that “43 have Orientalist depictions, and two align with the theme of anti-Blackness.”

Geisel began his professional career by drawing propaganda cartoons during World War II, so it’s not surprising that he would use stereotyped and racist imagery in that time. What is less understandable is why he continued using that style long after the war ended and he’d become a children’s book author.

Why did he? Was he ignorant and blind, so ensconced in a White world that he didn’t realize the pain or discomfort his images would create for children of color? Or was he, at heart, racist? Because he chose those images. He thought about them. He developed them, committed them to paper.

As an author myself, I know that every word, every stroke of the pen is a conscious decision, labored over for months or even years, and it gives me pain to think that an author that gave me so much joy as a child could make such poor artistic choices. And it makes me wonder whether—or to what extent—any of Dr. Seuss’s more racist imagery shaped my thinking about race or People Who Don’t Look Like Me.

In my own work, I fret about how I depict race all the time. I have significant secondary male characters who are persons of color. I worry: are they well-rounded? Grounded in their culture and background, but not stereotyped? Do I know enough about those cultures to depict them reasonably accurately? I hesitate to write scenes from the point of view of these characters, because they are not the protagonists and because I think it might be hubris to suggest I could fairly write from the point of view of a male person of color.

So far, no reviewer has complained that these characters are racist stereotypes. Will that be true in five years, or ten? You never know how history will judge you, although I do my best with the tools and understanding I have today.

I’m not sure Dr. Seuss did his.

What about you? Did you read and enjoy Dr. Seuss as a child? What do you read to your own children or grandchildren?