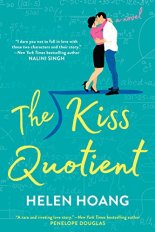 With the holiday weekend approaching, lots of folks in my area and around the country are heading to the beach. For our non-US friends, Memorial Day in the US is a federal holiday for remembering and honoring people who have died while serving in the United States Armed Forces. It is currently observed on the last Monday of May, which means a lot of Americans have the day off (and head out of town or have a cookout). With beaches on the mind, I was thinking about beach reads for this summer. I’m not heading out this weekend but will probably have some time to put my nose in a book. I’m looking forward to the second in Kevin Kwan’s series, China Rich Girlfriend. I read the first, Crazy Rich Asians, recently and, while not particularly well written, it was entertaining so it might be that one next.

Some of my recent reads that I can recommend are:

The Kiss Quotient, by Helen Hoang. Stella is brilliant and on the spectrum so she’s socially awkward, but smart enough to compensate until things get socially/sexually intimate, then all bets are off. Michael is a professional escort (among other things) and while he usually only limits his encounters with his clients to one, he agrees to Stella’s longer-term deal to teach her to be less awkward. I’m a sucker for good characterization and character arcs and Ms. Hoang is brilliant with Stella. I loved this book.

Josh and Hazel’s Guide to Not Dating, by Christina Lauren. Hazel is very quirky with no filter on her mouth. At All. Josh knew Hazel in college but wasn’t a huge fan. When they reconnect it’s as friends through mutuals (Hazel’s bestie is Josh’s sister). This isn’t my usual style because it’s a little zany and the characters are younger than I typically read. Also, it’s in alternating first person and I’m a fan of close third, but it’s very entertaining.

However, you might want some other opinions to consider:

All three of these lists had lots of repeats (which is why I’ve included them here).

What’s the beach read you’re looking forward to this summer?