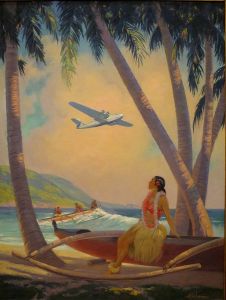 Read this, and then look back here. Do I know how to mix a metaphor, or what? (Image via Wikimedia Commons)

Since Wednesday, I’ve been trying to shape a metaphor about my writing. At one point, it was looking really good – writing is like surfing. I catch that wave, I ride it out to its thrilling conclusion, and then look around for the next.

Yeah, it’s just like that. But then I extended the metaphor. I don’t write at the same time every day. It’s like I’m out in the juice shack, tending to my dayjob or doing my night chores, and sometimes, I can feel that great wave building off in the distance. I ditch the juice shack, run out, and catch that wave and boom! Best feeling in the world!

Then I chided myself. If only I’d just head out into the ocean every day around tide time. Sure, maybe I wouldn’t catch a wave every day, but I’d be there to catch the little waves, and I’d be able to ride the big ones a little longer because I was prepared.

I don’t like it when I chide myself. The chidden part
puts her fingers in her ears and starts singing until the chider gives up. The chider gives up easily these days . . . there are so many things that she needs to be adult about. She thinks, “I should make a chocolate cake next time, and slide the spinach puree in with the eggs. The chidden one would swallow it whole if I only did that.”

The chider has great confidence in all the things that would go right in the world if only she could figure out the proper way to slip it past everyone else. The chider is a big believer in “should”.

The chidden one cheerfully does quite a few things. If there is a YouTube video to be watched, or a Twitter thread about political thinking to be scanned, the chidden one is ready for action. Or inaction, as the case often is. She likes a good ukulele practice, and is happy to take a ten-minute nap (or at least try) as long as there isn’t one whiff of “should” in the business. As soon as the chider brings out the “should”, the chidden one folds her arms and tunes out the world. “I wish I had a brownie right now,” the chidden one thinks. “I could conquer the world after a brownie.”

At any rate, the surf metaphor just turned into an excuse for why I can’t write. It’s just not my style. I should be writing every day. I should be writing long, long novels . . . but I can’t swim out to the earthquake’s epicenter, and ride the huge one into the harbor over the course of three days. For one thing, I like lunch breaks too much. Ever try eating lunch on a surfboard? Me, neither, but I can’t imagine it’d be pleasant.

But I don’t think that’s really true, either. It’s not the “shoulds” that are holding me back. I’m actually quite good at ignoring the “should” when I’ve got my eye on the prize. I think it’s a lack of vision. I need to do more about ignoring the wax on the surfboard, and the number of threads that need to be in a proper wet suit, and the ambient temperature as it relates to the wave and the rest of the water.

I might do better with a gambling model. At 7 p.m. each day (maybe after a 5:30 meditation/nap if necessary), I should ask myself, “Well, do you feel lucky today, punk? Are you going to catch a wave?” And go out with the expectation that the house will win, but I might just make a fortunate connection – something that can be expanded on, wave by wave.

And there, the metaphor mixes oil with water, totally breaks down, and tells me I should go have a nap and try this writing thing again. It’s only 3:30 p.m. here, so anything could happen this evening.

The really nice thing about waves, though, is that they come twice a day, and that’s every day. They may be high, they may be low, they may be happening in the midst of life’s storms, or on those beautiful days when you really need to be doing something besides surfing. But when I decide to take the chance, I don’t have to wait long for the next wave to come along.

2 thoughts on “Michaeline: Surfing Through My Mind”