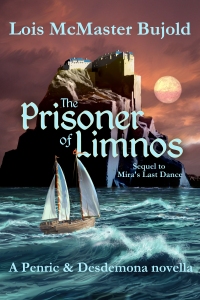 People who read Lois McMaster Bujold’s new novella, “The Prisoner of Limnos” in the first 24 hours of release got  bit of a shock when Lois announced on her blog that the early edition had somehow dropped the last lines of several chapters. (Links at the end; WordPress isn’t in a sharing mood today.)

As students of writing, we’re taught that these last lines are of extreme importance. Story, by Robert McKee, talks about how a scene can change the whole situation from a plus to a minus, or vice versa – and sometimes, it’s that last line in a scene or chapter that gives the final twist. Self-Editing for Fiction Writers by Renni Browne and Dave King also places importance on the final words of any scene. Compared to painters, we writers have it a little bit easier – we can put on as many finishing touches as we like, and all of them can be take-backs or do-overs with a simple application of the delete key or strike-out. In the editing stage, we decide, and the reader never has to know the anguish we put into those decisions to keep or to leave.

Given the importance of the endings, what’s shocking to me is that as an early reader of “The Prisoner of Limnos”, I only noticed one chopped-off ending. If endings are so important, what was going on here? I had had a great experience with the book as-is; had I missed an even greater book because the ending lines had been dropped?

Well, I’m happy to report my second reading was as rewarding as the first, even though I had to stop (!) and think (!) instead of ride the wave of story. From now on, we’re heading into spoiler territory, so if you haven’t read the Penric novellas, I highly recommend that you do, and come back. They are all fixed now, and you can update the old ones. (See second link below.)

“The Prisoner of Limnos” came out October 27, 2017! The electrons are still piping hot! (Image by Ron Miller, courtesy of Lois McMaster Bujold)

Lois McMaster Bujold’s new Penric novella, “The Prisoner of Limnos”, came out just Friday, and we’re very pleased to bring you our interview with her about covers – a subject near and dear to our hearts, because every good book is in the need of a cover, eventually.

EMD: For the early Penric covers, I know you asked for fan input about the public domain pictures you used, and I believe you mentioned that your agency helped you with the typography. Before that, did you have much input in the covers of your traditionally published books? What was the most useful piece of advice you got when you were choosing your own covers for the e-publications? What kind of parameters did you use for choosing the public domain pictures? And can you share any websites you found helpful in your search for a cover?

LMB: My input on my traditional-publisher artwork has varied over the years, from none to intense. There seems to be no discernible relationship between the amount of my involvement and the results. I’ve had great covers with no involvement, disappointing covers with lots, and the other way around, apparently at random.

I don’t recall I had much advice when I embarked on doing e-covers years ago with The Spirit Ring. (That would have been back in late 2010.) My helper putting them together could at the time only work with one image, cropping but no photoshopping, so options were limited. I wanted to choose historical paintings for the fantasies, because not only could I see what I was getting, but they were already at a high level of artistic accomplishment. Bad photoshopping/image collage is much worse than none, amateurish and off-putting, and any hint of photography was very wrong for the fantasy mood. As we’ve worked together over the years, my e-wrangler and I have both grown better at sorting through the challenges.