I’ve got a really cool video that just provokes all sorts of ideas in my head for stories. So, if you need a little bit of inspiration, grab a pencil and some paper, and try this:

So, I’m going to share some of the ideas that came to me during this video. It really was inspirational. (And if you want to run with them, go ahead! What you do with these seeds is going to be completely different from anything I do with these seeds.)

END_OF_DOCUMENT_TOKEN_TO_BE_REPLACED

Harlan Ellison, an SFF writer, at least once said when asked that he got his ideas from Poughkeepsie. “$25 a Week and they send me a fresh six-pack of new ideas fifty-two times a year” (Shatterday: Stories by Harlan Ellison).

Where do you get your ideas?

I’m getting mine from the cats these past few months.

Our new cat, Princess Charlotte, looks like a Norwegian Forest cat or a Maine Coon cat. Both breeds are friendly, chatty giants with long fur and athletic ability. Princess Charlotte (or Charli for short) showed up in our barn on February 15.

She holds herself like a princess, but attacks dem fishies like a warrior queen. And Norwegian Forest cats come with their own mythology and legends, so it’s natural

END_OF_DOCUMENT_TOKEN_TO_BE_REPLACED

Poughkeepsie: Where the ideas come from. (Image via Wikimedia Commons)

The last month has been an extremely creative time for me, but the general unsettled zeitgeist means I feel like I should be doing things other than writing. So, I decided to share some of my ideas that are going to waste. Feel free to execute them as you like, or add your own fun story ideas for people to pick up and share. Just make sure you have a protagonist, an antagonist, and a conflict. Or, provide half of the equation, and let people in the comments fill in the rest. You can add frills like the inciting incident, the time and setting, cool ideas and supporting characters.

*When asked where his ideas came from, Harlan Ellison said he would reply, “I get my stories from an idea service in Poughkeepsie, New York . . . $25 a week and they send me a fresh six-pack of new ideas fifty-two times a year.” – Shatterday: Stories, by Harlan Ellison

STORY IDEA #1: Amelia Hamsterkaufe, Miss North Carolina 1972, is now a suburban widow at a party in 1980 for her best friend (and runner-up) Betsy Hill’s birthday. Betsy breaks the news that she’s going to divorce her husband, Rex, and marry a scandal-ridden senator that she’s loved for the last ten years. Amelia absorbs the news under the moonlight on the patio, when she’s interrupted by Rex, who she has had a secret crush on since 1971. They begin to bicker about Betsy’s decision to divorce Rex, when a passing asteroid falls in the pool, and sends them both back to 1972 with their knowledge of the future, and a chance to change everything. 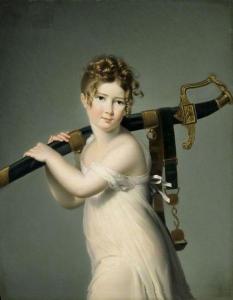 Girls keep finding these swords. What are they going to do with them? (Image via Wikimedia Commons)

What am I talking about? I’m talking about girls finding swords by lakes. If you’ve been on social media at all in the past 48 hours, you’ve probably heard about the little girl in Sweden (named Saga! Her name is Saga! How perfect is that?) who found a rusty old pre-Viking sword while playing near a lake.

If you haven’t heard about it, you need to check out this article in English from Sweden, or this Bustle article. The Bustle article also reminded me that this isn’t the first time this century we’ve heard about a “lady of the lake”. LAST summer, there was a little girl in Cornwall named Matilda who also found a sword in the pond that, according to local legend, had yielded up Excalibur, the sword King Arthur borrowed from the Lady of the Lake, and which eventually spawned one of the funniest Monty Python skits (3:16) of the 20th century. Matilda’s father said he thought the sword must be a movie prop that isn’t very old, but still, it remains. In September of 2017, a seven-year-old girl finds a sword in the lake. Sometime in the summer of 2018, an eight-year-old girl finds a sword in the lake, and this time, it’s a historical sword.

Do you see the pattern forming? I predict that in the spring of 2019, a nine-year-old girl is going to find a sword, probably somewhere in Germany, and this time, she’s going to save the entire world with it! The Ladies of the Lakes are collectively fed up with all our nonsense, and they are ready to get things fixed. No sense in waking up good ol’ Arthur. He borked it last time with Modred and Guinivere, so it’s time to put someone sensible in charge.

This, my friends, is the conspiracy we need now. The secret society of ladies of the lake could bail us all out! Sure, it’s no basis for a rational system of government, but we’re dealing with an awfully low bar these days.

Where do story ideas come from? It’s a common question, but that doesn’t make it any easier to answer. One science fiction writer glibly answered a fan with “I get them mail-order from Poughkeepsie” (or so the story goes), and that’s where END_OF_DOCUMENT_TOKEN_TO_BE_REPLACED