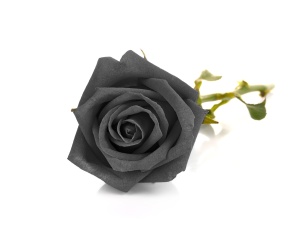 What would you think if your lover gave you a black rose?

Last week, we Ladies spent a lot of time looking at, talking about, and sharing book covers. By the end of it, I thought I was ‘covered’ out; then I quickly realized I have to engage a graphic designer for my January release, pronto. That sent me back to the interwebs, down rabbit holes and into quicksand pits. Eventually I emerged, a little worse for wear, but brimming with ideas not just for One Kiss from Ruin, but for the other books in the Harrow’s Finest Five series as well.

And one of those books might get a black cover.

Just like weddings, it’s all about love, romance, and the dress

As you might remember from my cover reveal last week, the cover of my series-launching novella features the heroine in a Victorian-era dress. A very pink dress. As a general concept, a woman in a period dress without her face showing has set the tone for the series covers. However, none of the other books in the series are the same low-heat (formerly known as sweet) level, so the innocence of pastels won’t be a hallmark of the series branding.

I already know the heroine on the cover of the first full-length novel in the series will be in green. The hero loves her in green, as it brings out the color of her eyes and makes him all swoony. And I found a stock image of a woman in an amazing green dress that I hope my designer can use (although that’s not necessary, as dress color is apparently a pretty easy thing to change). Then there’s the heroine of the third novel, who’s a fiery redhead, a femme fatale, and – so Society thinks – a merry widow. She wouldn’t show up to the event of the Season in anything less than a red dress.

As for my second novel’s leading lady, she would look lovely in blue. However, in the first few scenes of the book, she’s the mysterious woman in black. That black dress gets the hero’s attention, tugs on his – ahem, let’s keep it G-rated and say heartstrings, and is referenced occasionally throughout the book. I would love to have a cover with her in her black dress, holding her sparkling masquerade mask from the same scene, and maybe featuring another fun element that I’ll keep under wraps for now. But a black cover on a romance that’s not gothic or erotica? Is such a thing done? I’m so glad you asked, because I did some research, and here’s what I learned. END_OF_DOCUMENT_TOKEN_TO_BE_REPLACED