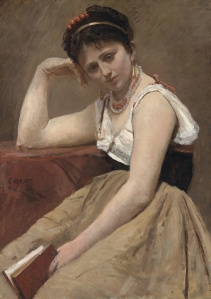 Do you ever take a book, and just let it fall open, put your finger on a paragraph, and read it . . . hoping to find advice and guidance? This is a very, very old fortune-telling technique, and while I don’t believe in fate, I do believe that the sudden juxtaposition of random nonsensical elements can make a lot of sense.

Brian Eno did juxtaposition with his cards of Oblique Strategies (today’s advice on Twitter: “What are the sections sections of? Imagine a caterpillar moving”).

David Bowie did juxtaposition with his music and his cut-up technique, which he borrowed from William Burroughs who used it in the 50s and 60s. (Burroughs was well known for his writing about the Bohemian subculture he was involved with; Jack Kerouac was one of his Beat buddies.)

I like just opening up a book of writing advice, and seeing what “the universe” wants to tell me. Of course, it isn’t “the universe”. It’s my own subconscious. If “the universe” tells me nonsense, I ignore it and go on. But if I like the paragraph, or if the paragraph really bothers me and refuses to let go of my imagination, I pay attention to it.

Today, I was looking at Creating Short Fiction by Damon Knight. The book has been in my backpack for the past three weeks, and last Monday I placed it in the bathroom, hoping I’d finally take a minute to start reading it again. I’m still not ready for a re-read, but opening the book and picking a paragraph at random gave me this:

“Notice that it isn’t enough to be interested or informed; it takes both. If you are interested in your subject but know little about it, you can’t satisfy the curiosity you arouse. If you know a great deal about the subject but are not passionately interested in it (like some scientists and teachers), you will put people to sleep.”

Since we were talking about research this week with Jeanne on Tuesday, I thought it was timely advice. I’ve got the third edition of Knight’s book, which was revised in 1985. It’s got a lot of practical advice for any writer, and can be read from start to finish, as well as being used for diving for pearls of wisdom.

So, I’m off to do some guilt-free research! If it interests me that much, surely I can make it interesting for at least some niche audience!