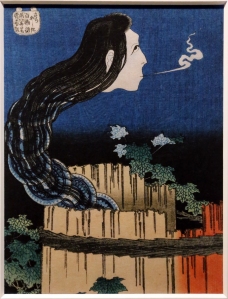 Okiku, the ghost rising from a well. Note how her body is made of plates . . . and she’s SO over 2020 and all its nonsense. Phew! (Image via Wikimedia Commons. Hokusai)

People are moaning and groaning that Halloween is going to be cancelled in North America this year, and others are vaguely annoyed by this attitude – mind you, I’m seeing this on Twitter, and most people are not even taking 280 characters to express their feelings about this, so half of what I report here may be my own imagination.

In Japan, Halloween has become quite popular, but mostly among the kids who go to English classes, and among the candy manufacturers. There’s a whole display of special orange, black and purple snacks for Halloween. Not bite-size candies to pass out, per se. And not really anything particularly scary. Just the candy company mascot dressed up as a witch, a vampire or a Munch’s Scream Guy. So, I HAVE been to a couple of Halloween parties in Japan, but they are mostly mass events where kids parade their costumes (95 percent of which are witches, vampires or Scream Guys), and then say in English, “Trick or Treat” at a booth to receive a small piece of candy.

I’ve hosted a couple of Halloween parties when my kids were small, but let’s face it. I’m not influential enough to change Japanese Halloween culture.

So, in Japan, anyway, it’s not going to be a big deal. They might have the mass events, with extra masks. It’ll be interesting to see if they tap into the horror of this year, and have more Zombie Nurses (2 percent of the costume parade) or COVID victims (obviously, this would be a debut costume), but I doubt it. Most people who celebrate will grab a bag of Scary Themed butter shoyu potato chips, and call it a season.

But anyway, I’ve got ghosts on the brain since July. August is when the ancestors are supposed to return home for a three-day holiday called Obon, and ghost stories are said to be a delightful cooling device when you don’t have an air conditioner – the chill down your spine during a session of evening stories is quite welcome.

For the first time, I’m thinking about Japanese ghosts. I have a modern story about END_OF_DOCUMENT_TOKEN_TO_BE_REPLACED