Coming this May…the next installment in the Harrow’s Finest Five series! In TwoScandals Are Better than One, our couple–Lucinda (Luci) and Edward)–face no seemingly unsurmountable external obstacles (other than needing to rescue her father from kidnappers) to being a couple. Instead, we join them on their journey as they fall in love, and they:

And now for the really fun part: the cover reveal! And the back cover copy/blurb to go with it.

A gentleman on an illicit lark 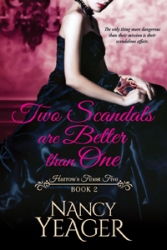 Edward, the upstanding Viscount Meriden, is desperate for one reckless adventure. After years of holding his crumbling family together, he finally indulges in one night of abandon at a debauched house party, where he meets a masked mystery woman. He longs to uncover all her secrets. But when he realizes she’s an old friend on a dangerous mission, he insists on becoming her protector.

A lady on a dangerous quest

Miss Lucinda Wagner is the only woman in a family of men rumored to be spies. When her father goes missing, she infiltrates a treacherous world to find him. No one suspects her double life until her childhood friend Edward discovers her secret. Now “Steady Eddie” insists upon watching over her. To gain his silence, she allows him to join her search.

A journey into the belly of the beast

As Luci and Edward delve deeper into the criminal underworld, their lives turn upside down. Danger lurks around every corner. Threats assail them from all sides. The only safe harbor in the city is in each other’s arms. Until the sparks between them threaten to ignite their long-denied passion.

Next week, I’ll have some more news about the series including a special sale, and when, where, and how to get Two Scandals Are Better than One!

When we read romance books, we know that, by definition, the couple will get a happily ever after (HEA). The joy isn’t the destination; it’s the journey. Not the what, but the how and, as Lisa Cron would remind us, the why.

But one thing I’ve been pondering as I finish my final round of revisions on the next Harrow’s book (Two Scandals are Better than One) is whether part of that journey should be the sense that this couple’s obstacles are so great, they just might not make it. Two Scandals doesn’t have that burning question. One of my beta readers listed it as a problem, although she liked the overall story. And as the writer/god of this story universe, I can thank her for that input and then choose to ignore it. But that bit of critique has stuck in my brain, because I think she might be onto something. END_OF_DOCUMENT_TOKEN_TO_BE_REPLACED

For last year’s Christmas story contribution, which I reposted a few weeks ago, I took you to modern-day Copenhagen to see how Nicky O spent his Christmas. (Hint: there were Danish Christmas hearts, a potential murder charge, and a very hot night with his married lover.) Ahem. This year’s installment, with a mischievous dowager duchess and a reluctant widower earl in 1870’s England, an excerpt from a future novella, seems downright tame by comparison. But there is that pesky little matter of the mistletoe…

Bennett Fairbank, Earl of Sandalwood, stood in front of the newly-stoked hearth in the study of his son-in-law’s country house and hoped very hard he had not allowed his beloved daughter Lucinda to marry badly. He’d been about to ask her about the inattentiveness and slowness of the servants in her new home when the maid had finally arrived with tea service.

“I’m so sorry.” Lucinda reached for his hands as soon as the maid had left the room and finally stood still long enough for Bennett to kiss her cheek. “We’ve had to hire so many new staff so quickly, what with fifteen guests arriving for the weekend, and Christmas preparations well underway.”

“I’d have thought your husband would have had a full staff ready for his new bride.”

“Lady Lucinda, here you are!” A familiar voice grated on Bennett’s ears.

The Dowager Duchess of Bridgehampton sailed into the room, bringing with her a blast of cold air from the hallway that reminded Bennett of the long icicles hanging from the eaves, one more task unattended. He might have to take the new servants in hand himself.

“I’m perfectly fine,” the duchess told his daughter, and Bennett realized he’d missed the conversation. “You go see to His and Her Grace.”

Lucinda flashed a smile and dropped a quick curtsy before flying out of the room as fast as the duchess had flown in, ruining yet another chance for him to have a private word with his daughter.

“Uh-hm.” At the sound of the duchess’s throat clearing, Bennett glanced at her. The woman had ensconced herself on the black leather settee, her fitted green gown with its waves of ruffles on the skirt flowing around her like an emerald sea.

Bennett shook his head slightly, wondering when he’d last been distracted by the color of a lady’s gown and realizing it matched the green of her eyes and, more perplexingly, why these unbidden thoughts had come to him now, just as he was considering taking his leave to find Lucinda.

This time Bennett caught sight of the duchess’s face. Those dress-matching eyes bored into him and her mouth was set in a slight scowl, as it usually was when he was in her company. END_OF_DOCUMENT_TOKEN_TO_BE_REPLACED 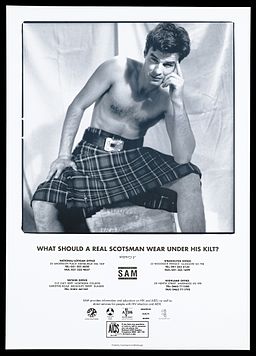 The Other Scottish Question
(Wellcome Images via Wikimedia Commons)

I have a question. As a reader, when you see a Scottish setting, do you automatically think a story must be historical? If you saw clear signals that a love story was set in present-day Scotland, would that surprise you? Would it ring your wrong-o-meter?

I ask because I recently received some feedback from a contest judge. I’m paraphrasing a little, but she said something like: I gave you a low score because your entry is a contemporary romance set in the Scottish Highlands. Everyone knows that if a book is set in Scotland, it must be a historical romance, so I feel strongly that your story has broken the promise to the reader, who will inevitably feel disappointed.

My entry was in the ‘contemporary romance’ category, I’d taken care to use a modern-sounding title, my characters were wearing contemporary clothing and using present-day language in a twenty-first century business discussion, so I was somewhat gobsmacked and not a little cheesed off END_OF_DOCUMENT_TOKEN_TO_BE_REPLACED 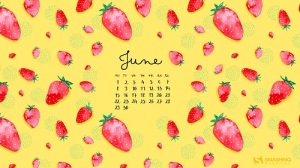 It’s that time again – time to reconcile my monthly progress against plan. The good news is, my writing projects are moving along nicely. The bad news is, I’ve lost track of what my actual monthly plan is. But now that we’ve officially passed the halfway point in the year, it’s a great time to revisit (or in my case, completely retool) the annual plan. More on that in a minute. First, a progress report.

Writing: Balancing Three Projects With One  Brain. When I discussed my 2015 writing plan way back in January, my number one goal for the year was to touch my story every day. Not only did I meet that goal in June, I exceeded it. END_OF_DOCUMENT_TOKEN_TO_BE_REPLACED

Where do you stand on intelligent, well-written historical romance?

By the time you read this, Justine’s UK research trip should be well under way. If things go to plan, we’ll have spent Friday in Brighton exploring the Royal Pavilion and other Regency landmarks with 8LW friend Rachel Beecroft, and Saturday investigating the narrow streets and smugglers’ haunts of the ancient Cinque Port of Rye. Today? If it’s Sunday, it must be Dover!

Justine will be following in the footsteps of a generation of US historical romance authors, walking the terrain of Kent and Sussex to soak in a million tiny details that she’ll use to give her stories an authentic and unique feel. There’s a strong tradition of quality historical romance writing in the US, and I’m constantly impressed by the way the authors skillfully mix historical accuracy and characters with agency to create novels that feel credible but appeal to a 21st-century reader. I especially love stories that go beyond Dukes and governesses and gowns – some of my favorite historicals may have Almack’s and corsets, but they also have spies, soldiers, suspense, mysteries, politics, business-people, dancers, actresses, and social change.

I’m really looking forward to reading the 8 Ladies’ contribution to this excellent tradition – Justine’s Three Proposals, Elizabeth’s The Traitor, and Nancy’s new series – but while they write, edit, polish and pick new titles, I’d like to celebrate some of my favorite US historical romance writers and (if I’m lucky) collect some new recommendations.

Off the top of my head, how about: END_OF_DOCUMENT_TOKEN_TO_BE_REPLACED 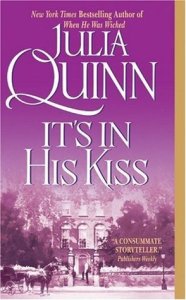 It’s In His Kiss is book 7 in Quinn’s Bridgerton series.

Last week, in Part 1 of this series, I discussed Louise Penny’s Chief Inspector Gamache murder mystery series, and some of the pros and cons of having a long-running series with the same main and supporting characters. This week, I’m going to talk about a form much more familiar to romance readers: related books with a different set of main characters for each story. And it’s hard to think of a more fun way to look at romance series than revisiting Julia Quinn’s Bridgerton family, eight siblings (and eventually their widowed mother) who each get their own HEA.

In all honesty, I can’t remember which book of this series I read first, and it’s hard to pick a favorite. Thus far, I’ve only reread three of them with the goal of learning lessons to apply to my own future historical romance series, but already, I’ve gotten some great ideas.

Assemble a fun cast of characters, and give each of them a moment in the sun. END_OF_DOCUMENT_TOKEN_TO_BE_REPLACED 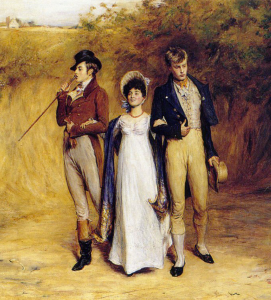 “Two Strings to Her Bow” by John Pettie, 1882. From Wikimedia Commons.

This past week, on one of the author loops I read, someone posted about her preference to read historical romances in which heroines either don’t step outside the bounds of the time period’s social structures, or suffer (social) consequences if they do. While I don’t want my 19th-century heroines to read like 21st-century women, I can’t get on board with keeping our heroines from stepping over the lines or cutting off their toes if they do.

During our McDaniel classes, we discussed the need for characters, especially protagonists, to be in some ways larger or better or more interesting in stories than most of us are in real life. A story about ordinary people going about their ordinary lives under ordinary circumstances just isn’t likely to be a very riveting read. One or more of those ‘ordinaries’ need to become extraordinary to make our fictional worlds worth exploring. And I want my historical heroines, whether I’m reading about them or writing about them, to be extraordinary. END_OF_DOCUMENT_TOKEN_TO_BE_REPLACED