The method that is used to design computer systems is described as “outputs, inputs, process.” That is, you first define what you want the computer system to do (outputs). Next you identify the data you have to feed into the system (inputs). It’s only after you complete the definitions of these two items that you think about processes—the steps that will translate inputs into outputs.

Because my career was in I.T., my plotting process looks a lot like that. My first thought is about outputs–how do I want my story to end? What kind of character arc am I looking for?

For example, in my current WIP, I want the story to end with the couple, demons Lilith and Samael, becoming a loving, human family. For this to happen in a believable and satisfying way, Lilith’s character needs to arc away from rebellion and resentment to trust and joy. Sam needs to arc away from workaholism and ambition to being a family man.

Then I think about the inputs that are required to create that kind of story—characters and setting.

In this case, the characters were delivered to me by the ancient Judaic legends contained in the Kabbalah. If you want to read more on my take on the legend of Lilith and Samael, you can download a free short story, “Original Sin,” by signing up for my newsletter on my website.

It’s only after I figure out these two “big picture” items that I turn my mind to the plot–the process of turning my inputs into the outputs I want to see at the end of the story.

That’s still a work in progress.

The backstory is that, 10,000 years ago, Satan decided Hell’s power couple, Lilith and Samael were a threat to his supremacy, so he demanded they split up. As the story opens, trade talks between Heaven and Hell are in the offing and he orders them to collaborate to ensure a good outcome for Hell (e.g. an increase in human misery).

Former human turned she-demon Lilith tries to refuse the mission, but when Satan threatens to take away her immortality, she decides to use the opportunity to sabotage her ex, whose career in Hell has far eclipsed her own.

Even though 10,000 years have passed, Sam has never gotten over Lilith. Figuring that what happens Aboveworld stays Aboveworld, he plans to seduce her back into his bed for the duration of the mission and then abandon her again.

On Earth, Sam leads Hell’s delegation while Lilith handles the administrative details. Her angelic counterpart turns out to be Gibeon, the very angel who predicted the death of her first baby (see aforementioned short story) and told her she’d never have a child that survived infancy. If she does, he will be branded a false prophet, thus ending his career in Heaven.

Then Lilith becomes pregnant, and she must figure out how to keep her child safe from an avenging angel, the lord of the Underworld—and its own father.

So this is the cover of my book that was released in September:

And this is a statue on display at the Illinois State Capitol, courtesy of the Satanic Temple-Chicago Chapter.

In case you can’t make it out, it’s a sculpture of a woman’s arm, wrapped in a snake, leading up to her hand, which is holding an apple. The inscription on the base reads, “Knowledge is the Greatest Gift.”

Not sure exactly what to make of that… 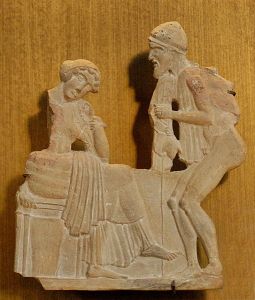 In this terracotta relief circa 450 BC, Odysseus, disguised as a beggar, tries to make Penelope recognize him.

There’s nothing new under the sun, or so say Ecclesiastes, Shakespeare, and conventional wisdom. When it comes to writing, there’s truth in that. You’re not going to be the first to write a love story, a murder mystery, or a journey into the depths of misery of the human soul. But, so continues the thought, that’s okay because you’ll bring something else to your story that no one else can – you.

Sometimes writers go even further and base a story on the structure and meaning of an existing work. In fact, they do it all the time, sometimes quite successfully (West Side Story, anyone?). Borrowing from existing works such as mythology, fairy tales, and Shakespeare allows us to learn from the masters as we write, and can give us guideposts for our own writing. And it’s not all bad for readers, either, as readers’ minds to attach to the familiar, even when it’s barely recognizable, and hopefully a story will bring enough new twists to surprise and reward along the way. END_OF_DOCUMENT_TOKEN_TO_BE_REPLACED