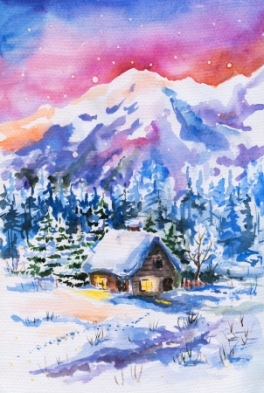 Welcome to the 8LW 25 Days of Stories.  So far, our stories have included rhinoceroses, villains, celebrations, and love, with settings from Derbyshire to New York.  Today our story location will be “a cabin”, where we’ll be meeting Rob Smith (not his real name).  This “Christmas Week Short Story Challenge” — a holiday version of our Friday Writing Sprints — features (some if not all) of the following words: snuggle, impress, mask, collapse, icicle, regret, famous, sneeze, scandalous, spark, impulse, and fantasy.

So here, courtesy of 8L Jilly, is today’s story.

Rob Smith (not his real name) fixed a large spray of mistletoe to the deer antlers that branched conveniently over the sheepskin rug in front of the log fire. Saving the free world from the bad guys was what he did, three hundred and sixty four days a year. Accepting personal thanks from a single representative of those he saved was his annual gift to himself on the three-hundred-and-sixty-fifth.

This year he had the Ambassador’s daughter to snuggle with. When he’d returned the gorgeous Gina safe and sound to her famous, wealthy and relieved father, she’d made it clear, in scandalous detail, that she wished to reward him in person.

Gina hadn’t been happy he’d made her wait so long, but really, what better time than Christmas to turn that fantasy into reality?

His pager buzzed. Oh, no, you don’t. Not today.

He turned it off.

It turned itself back on and buzzed louder.

He threw it out of the cabin door and into a snowdrift where it vibrated loudly for a third time before falling silent.

Three times? Whatever it was, it was bad.

He fished carefully into the breast pocket of his woolen shirt as though his satphone was an IED. It might as well have been. He turned it on and waited for his boss’s PA to ruin his holiday. Ivy McPherson, probably not her real name. Known as The Icicle, which should have been.

“Smith. ” The Icicle’s humorless tones lowered the temperature in the cosy cabin from toasty to tundra. “What happened to your pager?”

“Good.” She cut him off before he could volunteer to pay for it. “Don’t go anywhere.”

He waited, but the line was dead. So was his phone, when he tried to reactivate it.

It wasn’t long before he heard the whine of a snowmobile, which was weird. If he was needed back at base, surely they’d have sent a helo.

He cast a look of regret at the champagne cooling on the counter, shrugged on his jacket, hat and gloves, and went outside to await his fate.

The machine came around the corner at speed, perfectly balanced on the outside of one ski. It braked to stop in front of the cabin in a spray of fresh snow. The rider dismounted and stood facing him, hands on hips. The fine fabric of her state-of-the-art bodysuit hugged a figure that was unmistakably feminine, but the kind of strong, confident feminine that announced : I don’t need you. I can rescue myself.

The rider took off her helmet and shook her short hair into spikes that shone white-gold in the pale afternoon sun.

“Ivy.” She secured her helmet and crossed the crisp snow to where he stood trying not to hyperventilate. “What are the Department’s three unbreakable rules, Smith?”

“Don’t lie. Don’t ignore your pager.” He cleared his throat. “And don’t sleep with clients.”

She crossed her arms and stared at him. He felt an almost irresistible impulse to drop his eyes and kick the porch step with the toe of his boot. Nothing to do but fall back on the tried and tested. “I always understood it was more of a guideline.”

She sighed, leaving vapor trails in the cold, dry air. “Tell that to the Ambassador. He’s currently discussing the fine print with the Boss.”

He didn’t know whether the spark in his breast was indignation or embarrassment, but he fanned it. “That’s ridiculous. Gina’s an adult. Surely she can make her own decisions.”

“She certainly can. Did you know she’s keeping herself pure for her future husband?” Ivy made the clicking noise that annoyed him so much when he heard it over the phone. “Which she and His Excellency have decided is going to be you, Smith.”

Ivy walked past him, kicked off her boots and stepped into the cabin. She shrugged out of her suit and slid her slinky cashmere sweater off one toned shoulder. She didn’t appear to be wearing a bra.

“Diamant Bleu. Very nice.” She twisted the cork expertly from the bottle on the counter, poured two glasses and handed him one. “You certainly know how to impress a girl.”

“I wish,” he said, and then, as she reached up one-handed to unfasten the top two buttons of his shirt, “what are you doing?”

“Rescuing you, Smith,” she said quietly. “You’re going to need a cast-iron alibi this time.”

For a moment her mask slipped, and he saw kindness and humor behind the intelligence in her bright hazel eyes. And heat. Unmistakably heat.

“Thank you.” He bent to touch his lips to hers and tasted frost, and champagne, and something strange and wonderful.

“Sorry about the collapse of your well-laid plans, Smith.”

I hope you enjoyed that.  Drop by tomorrow for another short story.