Here’s my contribution to the 2020 8 Ladies Christmas Short Story Challenge. I think I got all the prompt words!

George and the Dragon 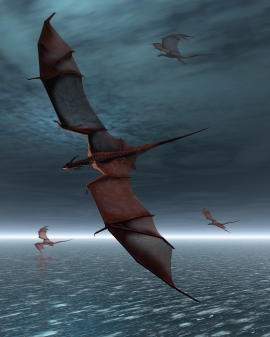 The winter sun was low in the sky as Georgina Albion moored her sailboat at Stack Aerie’s small dock and picked her way along the slippery wooden boards, ignoring the freshly painted PRIVATE PROPERTY sign and the new ones that said NO TRESPASSING and VISITORS BY INVITATION ONLY.

She raised her eyes to the scudding clouds, but her thoughts were directed at the reclusive new owner. How can I be be invited, if you never answer your post or open your email?

There was a painted steel circle beside the first step of the narrow stone stair that clung to the vertiginous cliff face, and another at the top. Stylized dragons with razor claws and fiery breath, contained within a red perimeter and crossed by a red diagonal bar. In case that wasn’t clear enough, the message was spelled out below: NO DRAGONS HERE.

George stopped for a moment to trace the image with a fingertip. “If that’s true, your Uncle Basil made a big mistake.”

From the cliff top it was a short walk to the futuristic glass-and-steel dome that perched atop the towering granite sea-stack. She knew from past visits that the bubble’s airy interior was comfortable but sparsely furnished. The temperature was always pleasant, the filtered light clear and bright, and the views out over the stormy ocean and back toward the mainland were breathtaking. The traditional rooms—a kitchen, dining room, office, bedrooms—were below, set within the rock. And far, far, far deeper, under the ocean bed, Bas’s treasure cave lay hidden.

The reinforced glass door was flung open before she could ring the bell. “What now?”

The man who blocked the entrance was tall—six and a half feet of long legs encased in dark jeans, broad shoulders snugly wrapped in black cashmere, chiseled features, and short, dark, spiky hair. The luminous eyes that glowered down at her were a distracting golden green color, with an unmistakable amethyst rim.

George blew out a breath. There was no mistake. Bas had chosen his successor. The rest was up to her.

“Tarragon Drake?” She thrust out a hand. “I”m George Albion. Co-owner of DragonFest.”

“DragonFest?” Mr. Drake made no move to take her hand. “The upcoming week-long wyrm-themed jamboree that appears to be on the bucket list of every fantasy obsessive on the planet?”

“I see you’ve heard of us.” George drew back her hand and brushed it down her hand-painted DragonFest leather flight jacket. “That should make this discussion easier.”

“I doubt it.” His lip curled just enough to show his very white teeth. “I might admire the skill used to spin an obscure Cornish legend into the draconican equivalent of Area 51, were it not for the gullible dragon-seeking idiots who trespass on my private property and ring my doorbell every…damn…day. Ms. Albion, you have single-handedly wrecked my inheritance.”

“Actually, I’m here to preserve your inheritance,” George said. “And I’m expecting you to preserve mine.”

He quirked a brow, but at least he appeared to be listening.

“I’m co-owner of DragonFest.” She wasn’t much of an actress, but she waited a beat until she was sure she had his full attention. “The other co-owner is you, Mr. Drake.”

“Just Drake,” he said automatically. Then her words sunk in. “What?”

“Drake, did nobody tell you there’s more to being Bas’s heir than inheriting a spectacular house in the middle of the ocean? This place comes with responsibilities.”

He hunched a cashmere-clad shoulder. “There were a couple of archaic provisions in the deeds. Bizarre covenants. You often find oddities around very old and unusual properties. My lawyer told me to ignore them.”

“City boy, was he?” George buttoned her lips tight before the epithet fizzing on the tip of her tongue could escape.

Clearly this wasn’t going to be a short discussion. George sighed. “It’s freezing out here. Can we please go inside?”

He stepped back and she walked into the dome. It looked pretty much as Bas had left it, with a large desk, a couple of comfortable armchairs, and a coffee table. Except now there was a sleek computer on the desk, and a lightweight notebook beside it. Most of the rest of the desk, and much of the coffee table, were crowded with rock specimens of various shapes and sizes. Crusty on the outside, colorful and beautiful on the inside. Like Tarragon Drake, if her luck held.

“I’m a mineralogist.” He picked up a rock and cradled it in his palm, holding it as gently as if it were a living thing. “There are still many undiscovered species. I have a knack of finding new ones.”

“Figures.” George settled her jacket and backpack on an armchair. How to say this? “Do you know how DragonFest started?”

Drake tilted his head. He didn’t say get on with it, but he might as well have done.

“As a twenty-first birthday present to himself my dad went on a round-the-world tour. He didn’t have much money, so he traveled cheap and lived rough. Somewhere along the way he met your Uncle Basil.” She’d heard the story times without number, from Bas and Dad. “Bas was even more broke than Dad, and he had five younger sisters to support. So Bas came to England with Dad. Don’t ask me how. Together they started DragonFest. Our family owned Stack Aerie, but Bas loved the place from the moment he saw it, so Dad sold it to him. I’m sure your lawyer told you the price.”

“A stone from his hoard. Whatever that means.” Drake rolled his eyes.  “And a ridiculous, non-enforceable covenant that requires the owner of Stack Aerie to fly over DragonFest at a height of between 500 and one thousand feet every year at midnight on the winter solstice.”

George shook her head. “It’s not ridiculous. It’s the key to the success of DragonFest. Bas did it every year, come rain or snow, even when his joints were getting really creaky. Now it’s your turn.”

Drake stood, holding his favorite rock, staring at her with those amethyst-rimmed eyes. He wasn’t stalling. He really did have no idea.

“Bas was a dragon. So are you, or he wouldn’t have left you Stack Aerie.” George kept her voice low, calm and determined. Don’t spook the firedrake. “You feel it, don’t you? The pull of this place?”

“Of course. It’s natural and unspoiled. My kind of place. I’m a ge-o-lo-gist.” He pronounced the word slowly, as though she might have to look it up later.

“Dragons have an affinity with gemstones,” she countered. “Then there’s your name. You must know it means Dragon. Not to mention your eyes. Only dragons have that shade of amethyst.”

“That’s it. You’re done wasting my time.” He put down the rock, picked up her jacket, and held it out for her.

“I don’t think so.” George grabbed her backpack, took the barnacled gray rock from the top pocket, twisted it open, and removed the perfect amethyst from its resting place within. She closed her fist around it, then turned her hand palm upwards, opened it briefly and then clenched it tight.

“Ohhhh. Mine.” Drake’s entire being focused on her hand. Her jacket dropped from his fingers and landed softly on the floor.

“No. Mine.” She didn’t turn around, but she knew he was close behind her as she stalked out of the dome and down the path to the cliff edge.

“If you can catch it, you can have it.” The icy wind whipped around her as she planted her feet, drew her arm back and pitched Bas’s hoard stone as far over the edge as she could manage. It sailed for a moment, glimmering in the dusky light. Then it plunged out of sight.

She heard a low moan of distress, followed by a warning scream that raised goosebumps on her goosebumps. She felt a rush of air as Drake hurled himself off the cliff in a blaze of gold-green and amethyst. For a moment he was gone and she wondered if she’d made the mistake of her life. Then he soared high above her, spinning and swooping, Bas’s treasure locked in his claws.

She scooped up Drake’s cashmere sweater and pulled it on as she watched the show. It smelled of laundry soap and clean dragon, like Bas but somehow younger, stronger.

Eventually he came down to earth. He fumbled the landing a little, but he’d soon figure that out. She averted her eyes as he pulled on his jeans and t-shirt.

“I’m a dragon. I can fly.” His grin faded a little as he held out the stone. “I believe this is yours.”

She shook her head. “It came from Bas’s hoard. I think it’s time to return it.”

“Thank you.” The deep bow he offered her was worthy of royalty. He cleared his throat. “So. I have to fly over DragonFest. At midnight. On the winter solstice.”

“It’s traditional,” she said. “People come from all over the world to see it.”

“Will you stay for supper? Tell me all about it? Tell me about Bas?” It wasn’t easy for a dragon to make puppy eyes, but somehow Drake managed it. “I can’t promise you a feast, but I make a decent omelette.”

So George stayed for supper. And breakfast. And lunch.

The images from DragonFest were the talk of Instagram. And Atlas Obscura. And National Geographic. Was it a hologram? A puppet? A drone? Nobody could decide, but everyone agreed it was a must-see experience.

And safe on their rock, away from prying eyes, George and her dragon lived happily ever after.

I hope you enjoyed reading that as much as I enjoyed writing it!

5 thoughts on “Jilly: George and the Dragon”