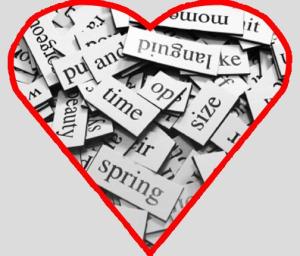 For as long as I can remember, I’ve been a fan of words.  One of the earliest memories I have is of being with my mom at the salon, waiting while she had her hair done.  I had not yet learned to write, but I had a crayon and a pad of paper and was diligently “writing” away, stopping every now and then to hold up the pad of paper and ask if I’d made any words yet.  I have no idea why that is stuck in my head, and I have a suspicion that it’s a story I was told rather than one I remember, but I know the fondness for words is real.

I think one of the reasons I write is because I love to play with words.  There is nothing like finding just the right combination of words to get an exact thought on the page.  Though, in all honesty, my writing is often filled with underlined spaces where I’ve been unable to think of the word I want and have pressed onward, hoping the right word would come to mind eventually.

One of my favorite finds at a used bookstore years ago was a copy of the Oxford English Dictionary.  The big oversized version that comes in a box with a little sliding drawer at the bottom holding the magnifying glass necessary to read the entries.  I can’t tell you how much enjoyment I got out of randomly reading pages of words–where they came from; how they were used; and the very nuanced meanings of words that seemed interchangeable but really were not.

I’m not sure when I stopped word-fossicking like that.  Probably when it became too difficult to do, even with the aid of the magnifying glass.

In going through boxes of paperwork recently–I believe that’s Pandemic Activity #5, after mastering sourdough but before learning to play an instrument–I came across an old notebook full of words.  Not words strung together to make something useful like a sentence, a paragraph, or even story, but pages of words that I had encountered in my reading and thought were worth saving.  Flipping through the notebook was like going on an archeological dig, with the various pages clearly indicating what I had been reading at the time and just how much of that reading was influenced by British authors.

Apparently I was quite the fan of the word defenestration–it appeared in the notebook on multiple pages–as did peckish (though perhaps I was just generally hungry while reading).

The other day I came across a post from a writer with “Some of the Best Words Literally Ever!”

While these might not all have made my own personal list, I will admit a fondness for shenanigans and canoodle.  I wouldn’t be surprised if some of these words make their way into one of our Friday Writing Sprints.

So, what words would be on your “Best Words Literally Ever!” list?

3 thoughts on “Elizabeth: Playing with Words”