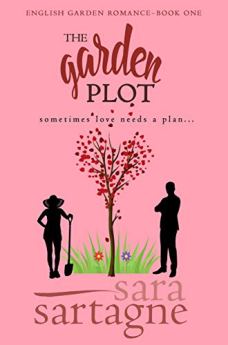 How’s your weekend so far? Are you glued to the news or ready for a respite from reality? If you’re currently self-medicating with The Great British Bake-Off or English property renovation shows, you might consider checking out The Garden Plot, a thoroughly English contemporary romance by debut author Sara Sartagne.

Full disclosure. I’ve known Sara for a very long time. I won’t embarrass either of us by saying how long, but back in the day we attended the same Derbyshire school and shared English classes. I lost touch with her later and had no idea she was writing fiction until we met again online in Mark Dawson’s self-publishing community.

Regular readers of this site will know I’m more likely to read a swords-‘n-sorcery adventure than a charming small town contemporary romance. I read The Garden Plot because it’s Sara’s debut and it’s set in a picturesque Derbyshire village. I’m reviewing it because I thoroughly enjoyed it.

The Garden Plot is an engaging, low-stress, opposites attract romance between Sam, a left-leaning garden designer who’s struggling to keep her small business afloat, and widower Jonas, a wealthy, conservative, workaholic property developer who’s on forced sick leave as he recovers from a viral illness. Sam is commissioned by Magda, Jonas’s match-making teenage daughter, to revamp the garden of Jonas’s recently acquired country house and (with luck) revitalize Jonas too. High jinks ensue.

If you’ve ever watched The Princess Bride or Pride and Prejudice, you’ll know how beautiful rural Derbyshire can be. It’s also a place where community is strong and people tend to be blunt but warm-hearted. The Garden Plot captures this vibe, and the rhythm of the Derbyshire dialect, perfectly.

The community is a delight. Jonas has his daughter, his parents, his glossy girlfriend, his best friend (a big shot garden designer), his second-in-command at work, and a couple of sharp characters his company is collaborating with. Sam has her sister, brother-in-law (the local Member of Parliament whose politics oppose Sam’s in every way imaginable), her teenage niece, her garden crew, her friends, and the village locals. They’re all distinctive, authentic, and deftly drawn, and together they add depth and context to Sam and Jonas’s romance.

The plot in question is a conspiracy between Jonas’ daughter, Magda, and Sam’s niece, Lisbeth. The girls are friends and believe Jonas and Sam are a match made in heaven. I may have vented here before about plot moppetry. This book taught me that I can enjoy tropes I generally avoid, if they are skilfully handled. Here, Magda and Lisbeth are satisfied to give Jonas and Sam the opportunity to get to know one another. The girls accept that it may not work. They agree that if it doesn’t, Magda and Jonas will get a great garden and nobody need be any the wiser. Smart kids.

I liked that both Jonas and Sam were entrepreneurs. He’s head of a billion-dollar listed property development megalith, she’s running a shoestring garden design company, but in essence they share a mindset and face similar challenges. That led me to believe that they had more in common than their external circumstances would suggest. And as someone who’s worked in entrepreneurial businesses, large and small, I enjoyed this part of the story and found the world-building entirely credible.

I’m a terrible gardener, but I love competence, and I adore characters who are passionate about what they do. I lapped up the garden design and plant details, because Sam is all about understanding what will work for her clients and their homes, rather than inflicting her preferences on them. I would pay good money to have her design my garden 🙂 .

The conflict, as you’d expect, arises around a property development. Jonas is involved in it, albeit indirectly, but keeps his involvement secret because Reasons; Sam is vehemently and overtly against it. This leads (kind of) to another trope I don’t usually enjoy—the Big Mis. Again, hats off to the author, because Jonas’s reasons for keeping his involvement secret were… reasonable, and while the revelation caused the obligatory black moment, the resulting fallout and subsequent reconciliation were handled with intelligence, honesty, and maturity by all parties.

Other things I enjoyed: Jonas’s glossy girlfriend is all wrong for him, but she’s not portrayed as a bitch, and she’s not used as a vehicle to make Sam look good. She moves on of her own volition, with smarts and style. I admired her guts and wished her well.

In fact the thing that I liked most about The Garden Plot was that it was so even-handed. I kept waiting for it to theme-monger, and it never did. Every character was the hero of their own story, and they were all treated with kindness, honesty and respect. They screwed up, but they were adult enough to admit to their mistakes and try to learn from them. That’s probably more of a fairy tale than a billionaire romance, but I loved it. If we really do read fiction to figure out how to deal with the real world, we could use more stories like this.

And a final thought—if you like the sound of The Garden Plot, you might like to know that there’s a sequel, Love In A Mist, starring Jonas’s best friend, the hottie Irish superstar garden designer, who takes on a project to create the perfect venue for Jonas and Sam’s wedding…

Wishing you all a happy, stress-free Sunday!