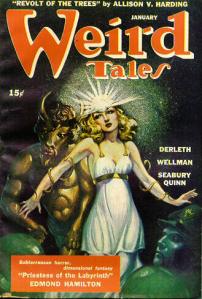 Margaret Brundage did win a Retro Hugo 1945 for Best Professional Artist at the 2020 WorldCon. Here’s something from the January issue of Weird Tales. (Image via Wikimedia Commons)

I should have written about the Hugo Awards last Saturday when it was a hot fresh mess. But, I’d already written something, and was following the Hugo story from my car as my daughter popped into stores to get necessary items.

Now, it feels like the storm has died down. The last time there was a big SFF brouhaha, some wit on Twitter said (about cancel culture, not the SFF drama) if people would just shut up and stay off social media for four days, social media would forget and move on. It certainly seems true – I saw a lot of the villains of the last uproar commenting and getting likes this week.

From my narrow perspective, it seems like the Hugo Award show, hosted by George R. R. Martin (you know, Game of Thrones?), was executed for a mostly white, mostly old live crowd of people who can afford to travel to New Zealand. However, due to COVID-19 concerns, CoNZealand (the 2020 WorldCon for members of the World Science Fiction Society) was virtual. Which meant younger, more diverse and poorer people could afford to participate.

The interesting thing about the Hugo Awards is that they are a fan-based award. Anyone who paid NZ$75 in time could vote for their favorites in the many categories. Heck, anyone who paid that fee OR was a supporting member of the 2019 WorldCon was eligible to nominate their true favorites to the ballot.

While the awards ceremony featured some huge gaffes and awards to racist, sexist white dead geezers, it also featured amazing winners and nominees from all over the spectrum of color and sexuality. And some of the acceptance speeches, such as the one by Rebecca F. Kuang for the 2020 Astounding Award for Best New Writer.

I think it bodes really well for the future of the SFF field as a whole. Readers like these people who put the nominees on the ballot are shaping the future of SFF.

6 thoughts on “Michaeline: Diversity and the Hugos”