This rose bush is an agile climber.

First off, I mentioned on Friday that my climbing roses were attempting to take over the house and a photo was requested.

Far be it from me to refuse a polite request, so here is a snapshot of my ambitious climbing rose reaching for the sky.  I trim it twice a month during the growing season (which is most of the year), but otherwise ignore it.  Apparently, that is just what is needed, since it grows and blooms consistently.

Now, on to today’s topic.

In Sunday’s Cast of Thousands post, Jilly talked wrapping up a series and balancing drawing the series to an exciting and satisfying conclusion against giving all of the characters one final time in the spotlight.  Not surprisingly, opinions were varied, though I think we probably all were in agreement about the need for a strong complete story. 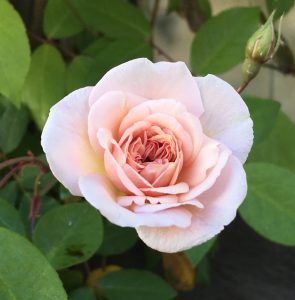 Here’s a close-up of one of the new blooms

The post got me to thinking about series in general and about the current series I just finished reading in particular.

Ngaio Marsh wrote 32 books featuring the charming Scotland Yard inspector Roderick Allyen, a gentleman detective.   Although there is no over-arching plot that spans the books, it is a series in that the books move sequentially through time and have a specific order.

The first book in the series was published in 1934 and the last in 1982.   While the stories don’t cover quite that long a time span, they do cover quite a bit.

Our handsome inspector is young and unmarried in the beginning of the series; he meets his true love along the way (on a case, of course); World War II happens (he spends much of it in New Zealand); he and his wife have a son; we later see that son as a young adult (involved in a mystery, of course); and Alleyn is promoted several times along the way.

The books are mysteries (obviously) but the parts that caught my attention the most were the little bits of pieces of Alleyn’s personal life interspersed throughout the series.  I loved the interactions between Alleyn and his wife, as well as sighting recurring characters such as the reporter Nigel Bathgate (who completely vanished from the series partway through).  Character is always more of a draw for me than plot when reading, and this series was no exception.

What I found interesting was how the depiction of the main character changed over the course of the series.  I read some of the books out of order, since I was limited by what was available at the time in my local library, so by the time I met the inspector, Marsh had written several of the books and seemed to have hit her stride.  When I finally read the initial books in the series it almost felt like I was reading about a different inspector.  The early depiction was not quite as likable as the later version and occasionally walked a little close to the “annoying character” line.

I guess that makes sense.  After almost 48 years, a writer’s style is likely to change quite at bit.  Plus, the characters in the stories reflected the time they were set in and their life experiences.  It is completely reasonable for the the inspector from the early stories set in the 1930s to be quite different from the inspector in the later stories set around the 1960s.  He’d lived through a lot at that point, including an amazing number of dead bodies.

Though the books were both written and set long ago, there was at least one story that dealt with some of the same racial issues that we are dealing with today. While the phrasing of this quote below might sound old-fashioned, the idea is still relevant.

“The average bloke’s ignorance of racial problems is deplorable.”

It’s always interesting to see how books hold up over time.  These held up from a story perspective (I was entertained enough to keep reading), but they had their share of cringe-worthy stereotypes, language, and depictions that were best glossed over.

On a lighter note, I had to laugh at this following exchange from one of the early stories, where the author does a little gentle chiding of her own genre.

“Do you read crime fiction”

“I dote on it,” replied Inspector Alleyn.  “It’s such a relief to escape from one’s work into an entirely different atmosphere.”

“It’s not as bad as that,” Nigel protested.

“Perhaps not quite as bad as that.  Any faithful account of police investigations, in even the most spectacular homicide case, would be abysmally dull.”

Reading this series reminded me about the importance of writing strong engaging characters (as if I needed reminding) and also got me thinking about how long a series should go on and what a good stopping point might be.  Marsh did a pretty good job putting the inspector in a range of situations, so it didn’t seem like he was doing the same thing over and over again (well, most of the time), but I think I had reached my limit for “murder of a cast member in a theatre” stories before she reached her limit of writing them.

The series didn’t wrap-up at the end, it merely stopped.  I’ll admit to feeling a little disappointed about that.  Although I’m not a fan of the big blow-out finale, I was kind of expecting the last book to have an ending kind of feel to it.  Though, to be fair, perhaps Marsh wasn’t intending that book to be the last in the series.  She did die the same year the last book was published.  An additional book in the series was published a few years ago, apparently written by another writer, based on some notes Marsh had left behind.

I was not tempted to read it.

So, are you a fan of long-running series or do you find you reach a point where you’ve had enough?

10 thoughts on “Elizabeth: A Series of Thoughts”