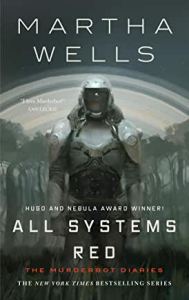 How much would you pay for an ebook? Or a series?

I’ve been trying to decide whether to invest in Martha Wells’ Murderbot books. I don’t usually dither over book purchases, but this series has me hovering over the buy button.

The community on Argh Ink (Jenny Crusie’s blog) loves Murderbot. Jenny loves and re-reads the series. These are smart people. They read a lot. They’re sharply observant and constructively critical about their recommendations and DNFs. They tend to like the kind of stories I like. So that’s a strong positive.

I read the first novella, All Systems Red, and really enjoyed it. I wasn’t desperate to read the next book immediately, but I haven’t forgotten it and moved on. I felt like that about Dorothy Dunnett’s Lymond Chronicles—had a hiatus of maybe a couple of years before I bought the second book—but that series became a favorite and one that I regularly re-read.

The Murderbot premise is great—an introverted, self-hacking robot protagonist who’s technically not a person but who has an engaging personality–fascinating, funny and conflicted. The author makes you care about the character. The writing is clever and complex. The stories are sci-fi, with lots of great world-building and action, but deeply character-driven. As far as I can see from a quick scan of the reviews, the first four novellas arc to a satisfying conclusion.

There’s really only one argument against Murderbot. The price. According to the many disgruntled reviews on the Zon, the first four titles are essentially one book, with each act published as a separate novella. According to Amazon US at the time of writing, they are:

That’s around $36 for one ebook. Or (since I already read the discounted taster installment), $32 for three-quarters of a book. I’d read that in an afternoon.

In theory I could buy the second, Artificial Condition, and then decide whether to continue, but unless a story is a complete disaster I like to finish it. Pretty sure that if I grab Book 2 I should expect to buy and read them all.

I’m lucky enough that I can afford to pay $32 for three-quarters of a book if I really want it. Right now I’m in the market for a little self-indulgence. I haven’t had my hair cut since early March. Or visited an exhibition or eaten in a restaurant. I haven’t traveled into Central London since the covid-19 lockdown was announced. The money I saved by on tube fares alone would easily buy Murderbot.

So it’s not about the money per se. It’s more a dislike of being taken for a ride. The last time I felt this cranky about the price of a book was Anne Bishop’s Etched in Bone (the last book in her Others series). I’m still sore about that. From memory I think her publisher priced the e-book at about $24 (more than the paperback) for the first year or so. I was outraged enough to wait it out. And eventually I read the book but by then I was so over the story I haven’t gone on to buy the new books in that world.

I think I’m likely to be stuck at home for a while yet, so I’m guessing that sooner or later I’ll crumble and buy the remaining Murderbots. Then it will go one of two ways. If the series turns out to be a keeper, I’ll be thrilled. I’ll re-read them over and over and you’ll never hear another peep from me about the price. If that doesn’t happen, I’ll feel as sore as the angry reviewers. Maybe more so, since I was warned.

What do you think? Have you read these books? Are they worth it?

13 thoughts on “Jilly: The Murderbot Dilemma”