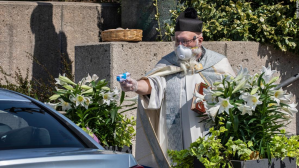 To prevent the spread of the coronavirus, Father Tim Pelc of St Ambrose Church in Detroit, Michigan, blesses parishioners by shooting holy water into their car windows. He’s been a little concerned about how the Vatican might react if these photos reach the Pope, but so far, no word from the pontiff.

Things are tough all over, but I’ve been happy to see that the Catholic Church seems to be doing a good job at improvising during the pandemic.

In other news, the folks at NaNoWriMo (National Novel Writing Month) have nagged me relentlessly the last couple of weeks, begging, exhorting, cajoling, and threatening me to join JuNoWriMo, the summer version of Novel Writers Torture Month. I have easily resisted this call, because I tried the November version once.

But when I was thinking about what to post today, I bumped into the blog of author Sarah Wynde, who talks about participating in this event. I’m sure otherwise she is a sane person. I’ve seen her comment on Jenny’s blog, and she always strikes me as intelligent and thoughtful, as well as amusing and kind.

In any event, to meet her NaNo goals, Sarah made a list of things she could do to stimulate her thinking when she ran into a wall. She said that she thinks writers block can be fixed only by writing more, rather than, say, taking a walk, which a lot of other people advise. This is a concept I agree with, so because I’m having trouble meeting my word counts, too, I read her suggestions with interest. Here’s her list of 20 things to do to get out of a writing stall.

**I must mention here that you try suggestion number 12 only at your peril. Four years ago when I had really bad writers block, I wrote in a dog. And then I was stuck with that pooch for three books, and every single month, my critique partners would say, “Where’s the dog?” until I was ready to rip their heads off.**

So, if you’re having trouble writing in these times of stress and upheaval, maybe Sarah’s ideas will help you. They sure helped me. What do you do when you don’t know what to write next? 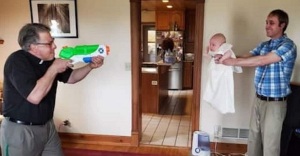 And now, because we don’t have enough fun in our lives, this is how we baptize babies during a pandemic.

11 thoughts on “Kay: Getting Unstuck”