Bugs Bunny’s star on the Hollywood Walk of Fame. (Image via Wikimedia Commons)

In my childhood, Saturday morning meant cartoons. No sleeping in for me! I was glued to the screen watching even crappy cartoons from six or seven a.m. until lunch. One of my favorites were the Looney Tunes cartoon hour. I enjoyed the tales of the Singing Frog from 1892 (One Froggy Evening, 1955), Marvin the Martian, and Speedy Gonzales, but my favorite stories were about Bugs Bunny.

I’m not sure how they got these cartoons on the air in the late 70s and early 80s. Parents were already wary of gratuitous violence – Wile E. Coyote and his plans to permanently rid his life of the cheerful Roadrunner, Elmer Fudd wandering around woods, forests and opera houses with his hunting rifle, Marvin the Martian ready to eradicate the earth and any loose Earthlings.

And then there’s the sensibility – many of these cartoons were first made in the 1950s, a whole generation before X. A lot of their humor was rooted in even earlier times – 1930s gangster movies, slapstick comedy and snappy banter. I didn’t know who Liberace was, or what a teen idol Frank Sinatra was, or a single thing about Sally Rand and her amazing fans . . . but it didn’t matter. The jokes worked anyway for pre-teen me.

Looking back, it does make sense. Violence was very much a part of our world back then – we worried about the Soviet Union nuking us, and gun violence was in the news daily. Also, those re-runs had to have been a lot cheaper than making new cartoons. What I liked best about them, though, is that even though they were accessible to an eight-year-old, they weren’t meant for an eight-year-old. I felt they gave me a peephole into a sophisticated universe. (Note, as an eight-year-old, many of my notions of sophistication were actually shaped by Warner Brothers. It was a cycle that fed itself.)

One powerful lesson that the Looney Tunes taught was the power of the underdog – a quick-talking rabbit who was clever could wiggle out of a lot of situations with a fast line and a change of clothing. A gun in the hands of a Looney Tunes character was almost always shorthand for privilege and power in the hands of an idiot. Someone who was not smart enough to wield that power effectively and for good. Elmer Fudd and Yosemite Sam were not concerned with peace and greater cooperation – they cared about their own selfish goals and entertainment. Marvin the Martian, I think it could be argued, cared very much about Mars and Mars’ premier status in the universe . . . but on the other hand, we never saw any other Martians besides Marvin and his ray gun and explosives, so I think it could also be argued that Marvin was out for his own jollies, not universal ones.

I can’t imagine The Rabbit of Seville without a gun. It defines character, works to move the plot forward, and is a symbol of Elmer Fudd’s power.

In this take on Giaochino Rossini’s The Barber of Seville, Elmer Fudd is a hunter who chases his prey (Bugs Bunny) into an opera house. Elmer is so engrossed in the pursuit that he fails to realize where he is until the curtain goes up. He tries to sneak off stage, but Bugs, in costume, makes him conform to the rules of “the show must go on” and proceeds to humiliate him.

Bugs appears as a Spanish lady and seduces Elmer, then ties his gun into a knot under the guise of “straightening his tie.” Elmer falls for it hook, line and sinker – then is enraged when he realizes the beautiful woman is actually his archenemy, Bugs. He shoots at Bugs, but because of the knot in his gun, he’s blown back into a barber chair, which leads to the delightful musical sequence where Bugs acts as the barber. Silly word puns on bottles leads to sight gags where Elmer’s bald head is transformed into a whipped cream fruit salad bowl, shaved off, and then turned into a miniature flower garden with daisies. 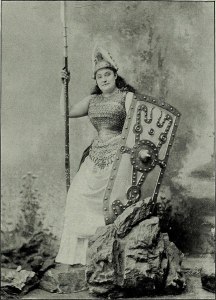 The Bugs/Elmer dynamic will work without a gun. In What’s Opera, Doc?, Elmer uses a spear and magic helmet to wield his unfair advantage clumsily against Bugs. Bugs again transforms into a woman to seduce Elmer (as the Valkyrie Brunhilda; Elmer plays the role of the hero Seigfried). Elmer again falls in love, and is betrayed when Brunhilda turns out to be a rabbit, and finally succeeds in “killing the wabbit.” (“Well, what did you expect in an opera? A happy ending??” Bugs remarks to the camera before playing dead again.) Elmer’s joy turns immediately to deep grief as he realizes that he’s actually killed his reason for living and the point of his existence.

Power is like that in stories – it’s most interesting when it’s placed in the hands of fumblers. The hero who needs to grow into her power can be compelling than the hero who has complete mastery over her power. The villain almost always misuses power. Even in modern villainy, where the villain is often working for a greater good, the misuse of power marks the villain as the bad guy. Her power advantage is often defeated through cleverness and consideration for powerless people who have other talents.

Time moves on. In this century, Bugs Bunny is mostly enjoyed by adults, as far as I know. Maybe that’s how it should be. They aren’t gone – I can pick and choose which cartoons I choose to show others, and which ones to leave in a dust heap. The cartoons were certainly a product of their time, and the world has moved on in new ways.