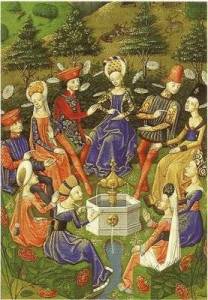 Seven ladies and three gentlemen escape the plague-filled city to have some fun and tell some stories in The Decameron. (Image via Wikimedia Commons)

I won’t count protest. It needed to happen. It still needs to happen, and unfortunately, it will continue to need to happen, I’m afraid. I could wish that everyone had gotten totally frustrated, fed up and ready to change the system for good when Trayvon Martin was murdered in 2012 (or any of the other times a black death at police hands sparked protest and outrage). However, I see why it is happening now, instead of last August. What with unemployment and staying at home, people have time to protest, maybe for the first time in their lives. And the pandemic’s side effects have certainly intensified everyone’s anger and outrage. Maybe this time, we’ll see a long-lasting change for the better.

But, back to the Corona. Oddly enough, most of the books I read in May ( 3 and 1/2 books . . . when will I be able to read again?) had something to do with The Plague. The Decameron (J.M. Rigg translation) was a bunch of really rich people who said, “Let’s escape all this crap, and sing and dance and eat good food in the good country air, and tell stories every night.” Two weeks later: “OK, bored now. Or going to get bored soon. Let’s go back to the plague-y town.” It took me a month and a half to read through two weeks of tales (with four days off for hairwashing and piety – on the characters’ part).

The Ozark tales sometimes borrow from The Decameron. (Image via Open Library)

It’s worthwhile to read this once in your life, I think. However, if you need something lighter, I would read Pissing in the Snow and Other Ozark Tales, collected by Vance Randolph. The best of the dirty jokes of The Decameron, but with down-home people. (Caveat: I last read this book in my 20s; it stuck with me, so it’s good. But there’s probably A LOT of problematic material in a dirty joke book that just didn’t register on my young radar. So, you have been warned.)

The new Penric story by Bujold, The Physicians of Vilnoc, was so good. Doctors working to solve the mystery of the plague, using cooperation and understanding and compassion and BRAINS. (The people of the Decameron did not apply their brains toward solving the problem at all. They applied their brains towards distraction, which is a good strategy, as far as it goes.)

I’ve been meaning to write a review of this, and it deserves one. Aside from the story of the plague (which is an engrossing mystery with higher stakes than any country house whodunit), it also provides justification for Penric’s 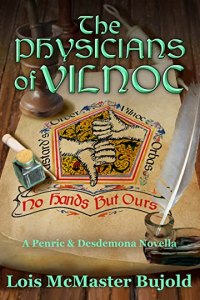 Penric and his demon, Desdemona, race to prevent a pandemic in The Physicians of Vilnoc. (Image via Goodreads)

path – he trained as a healer in his 20s, but suffered from a breakdown and almost committed suicide. In this story, he has to deal with his fears of burnout, and a reckoning of abandoning a healing path. He discovers that many of the doctors he runs into have heard of his translations of medical books. As a healer, he could have directly saved hundreds of people. But through his translation work, he indirectly saves millions over his lifetime and the future. This is a sideplot, if you can even call it a plot, but it’s an extremely satisfying aside.

Finally, by chance, I picked up an old novel (1909) called When a Man Marries. I picked it up mostly because one of the cover shots I saw was an omnibus with an unfortunate design, so it looked like the book was, “WHEN A MAN MARRIES THE MAN IN LOWER TEN” which sounds like a thrilling, ahead-of-its-time sort of book.

The author, Mary Roberts Rinehart, writes very well and has great characterizations, but also slaps the reader constantly across the face with the fan of casual, middle-class white racism. In this particular book, she writes crappy comments about a Japanese butler, South American native women, and the Irish. Her characters very obviously build their lives on the backs of lower class people, and so I feel I must include this as a trigger warning before I go into the pandemic part. She was definitely part of the problem.

That said, I was very surprised when this screwball comedy (and it IS very funny when it sticks to observations about its own class) centered on a smallpox quarantine. Jimmy Wilson is depressed because it’s the second anniversary of his divorce (in 1909). Kit, our narrator and his best lady-buddy (former flame), decides that what he needs is a dinner party, and invites a bunch of friends (two who bring along a handsome out-of-town guest) to his house. But, the Japanese butler comes down with smallpox in the middle of the dinner party, and is carted off to the hospital, and the authorities act swiftly to quarantine the entire dinner party in the house. Then jewelry starts disappearing. And an Irish cop is found sleeping in the basement. And the ex-wife returns for a visit just before the quarantine is posted on the door.

All readers in 1909 would recognize this man nailing a quarantine notice to the door and they’d understand exactly what a “yellow square of paper” meant. From Harvard Library’s copy of When A Man Marries.

I don’t know about you, but I’ve been focused on the flu of 1918 (and 1919) and slightly aware of the polio pandemic. I forgot that there used to be regular pandemics in the early 20th century — smallpox, scarlet fever, etc., etc. Quarantine was a regular occurrence, and everyone knew what was going to go down, and followed the rules (more or less).

Many of the same elements as our current lockdown appear in the story – ordering delivery from restaurants, scraping around for substitutes for basic tools that people can’t buy, dealing with boredom, fighting with other inmates of the quarantined house, and dealing with zealous police who are intent on keeping people in the house until the quarantine is lifted.

I think it can be said that romance writing often benefits from pressures on the characters – constraints that make certain actions forbidden. When A Man Marries is very thrilling from that point of view – the ten guests bring a history of friendship, quarrels and broken-off romance, while Mr. Harbison (the out of town guest) and the policeman provide a great pretext for explaining backstory. These people are trapped – there’s no walking away and thinking things through. They’ve got to deal with the problems and jealousies then and there. What with the advent of vaccinations and antibiotics, we haven’t seen quarantine as a social constraint for quite some time, but you can bet it are going to make a comeback in the 2020s.

Of all the plague stories I’ve read, Daniel Defoe’s A Journal of the Plague Year (which I read in March) was one of the most comforting. Defoe apparently relied on his uncle’s account to put together a historical novel. There’s not much of a plot. It’s basically an accounting of the London plague of 1664-5 – what was done, how people reacted, and is told from an eyewitness account. Defoe’s character prepared for the plague just in time for the next wave by laying in a supply of beer-making ingredients (clean hydration), flour (for bread) and a big block of cheese (because, cheese. Protein and calcium!).

So much of how I view the current Covid-19 crisis is seen through the lens of Defoe’s book. There’s a lot of practical advice despite being more than 300 years ago. Defoe recounts the deaths, hiding of deaths under different categories, unemployment, new jobs that spring up in the wake of sheltering-in-place, the problems of people fleeing to the countryside, the mass graves, and the short-lived joy and thanksgiving that followed the easing of the plague.

We are going to have so many stories to tell after this is over.

7 thoughts on “Michaeline: Plague Books for Fun and Education”