Ida and Louise Cook on their way

Ida Cook wrote to save Jews from the Nazis just before World War II.

I don’t think that was Ida’s plan, though. Many years later, she said: “The funny thing is, we weren’t the James Bond type. We were just respectable Civil Service typists.”

Born in the early 1900s, neither she nor her sister, Louise, ever married, as was common with many women of their generation after the deaths so many young men during World War I. Instead, they lived at home with their parents in south London.

They enjoyed travel, and their passion was opera. They became “opera groupies,” attending performances, waiting at stage doors in the hope of getting autographs, and writing to their favorite opera stars. In 1934 they visited the Salzburg Festival in Germany, where conductor Clemens Krauss befriended them.

Krauss’s wife suggested that they “look after” a friend who was visiting London. Speaking in a BBC radio interview in 1967, Ida Cook said: “I can’t emphasize sufficiently how we stumbled into this thing. This friend opened our eyes into the appalling situation Jewish people in Germany found themselves in. They were without any rights as human beings at all.”

The “thing” that Ida Cook referred to was the effort the two sisters made over the next five years to save Jewish lives and help resettle refugees in England. They risked their own lives dozens of times by smuggling out valuable goods for those attempting to flee the Nazi regime, as well as passing on messages and meeting contacts, some of whom were active in the underground movement, sometimes barely escaping capture.

The first obstacle for Jews who wanted to come to Great Britain was proof that they had a job to go to or sufficient funds to live on. The financial security was difficult to manage because the Nazis prohibited the export of valuables.

Ida and Louise persuaded people to vouch for refugees, by offering work or financial guarantees, to satisfy British requirements for immigration. But they risked their personal safety by smuggling out refugees’ possessions, because Jews, in 1934, could still leave—although “empty-handed.”

When the Cook sisters entered Germany to attend an opera, they wore plain clothing, no coats, no jewelry of any kind. But on the way home, they wore jewelry and furs—the possessions of the refugees—which they pretended were their own. They were also careful to enter and depart from different border crossings so that the same guard wouldn’t see them twice. If the ownership of the items had been called into question, they could have been arrested and imprisoned, even sent to a concentration camp.

Even so, they had to be careful. Earrings they carried back had to be clip-ons, as neither had pierced ears, and “that was the kind of thing officials noticed,” Ida said. And they had their cover story ready.

“We were two nervous British spinsters who didn’t trust our families at home, and so when we went abroad, we took all our jewelry with us,” Ida said. “There’s no answer for that. You can say ‘how ridiculous,’ but you can’t say ‘it’s not true’.”

As the Cook sisters developed a reputation for getting people out and resettled, they began to receive “the most pitiable appeals” from people wanting to leave. But in 1934, Ida and Louise were earning only £5 a week as shorthand typists. They couldn’t often afford to go abroad for the opera that gave them their cover. 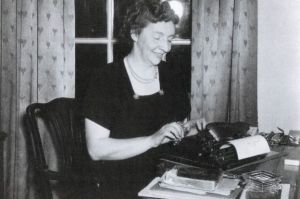 Ida Cook posing at her typewriter. I bet you anything, she did not wear little black dresses and nice jewelry when she really worked at that typewriter.

So Ida wrote what she called a “light romance” called Wife to Christopher, which Mills and Boon published. And over the next 50 years, under the pen name of Mary Burchell, she wrote about 130 novels for the publisher and, as she said, “the money just kept coming in.” This income funded the sisters’ trips to Germany and Austria. (Many of her books are still available.)

When their frequent visits aroused suspicion, Clemens Krauss, who was then director of the Munich Opera House, arranged for performances in the cities and on the days they requested so they could meet their contacts under cover. 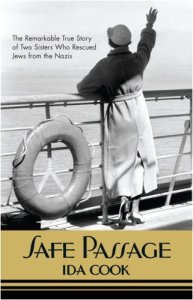 After World War II, Ida continued her career as a romance novelist. She helped found the Romantic Novelists’ Association, serving as its president from 1966 to 1986. In 1950, Ida published a memoir, now republished by Harlequin in 2008 as Safe Passage (film rights have been purchased). For risking their lives to save Jews from the Holocaust, the sisters were posthumously named British Heroes of the Holocaust by the UK government in 2010.

Pretty good story, right? And interesting to see how this romance author stood up.

3 thoughts on “Kay: How a Romance Author Helped Save the Jews”