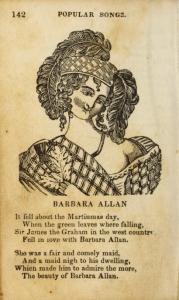 An autumn version of Barbara Allen/Barbara Allan. (via Wikimedia Commons)

There are a lot of different variations of the old Scottish/English/Appalachian song about Barbara Allen, but I was first exposed to the lyrics through a Bugs Bunny cartoon. (0:14) Porky Pig was dressed Friar Tuck, and strolled around singing about the merry month of May.

It was a great tune, and memorable lyrics. “A young man on his deathbed lay, for love of Barbara Allen.” (“Robin Hood Daffy,” 1958.)

Later in high school or college, we sang a different version in choir. The lyrics could be sung to Porky’s melody, though, so I’d switch between the two in the shower, depending on if I wanted to be light and lovely, or dark and mournful.

This is the way I remember the choir version:

“’Twas in the merry month of May
When all green buds were swelling,
A young man on his deathbed lay
For love of Barbara Allen.

“He sent a servant to the town,
He sent him to her dwelling
‘My master’s sick and he sends for you,
If you are Barbara Allen.

“Oh hooly, hooly, rose she up
And took her to his dwelling.
And all she said when she got there
Was, ‘My true love, you’re dying.’

(Missing in my memory – she leaves, and goes home. In the distance a deathbell rang and she realizes he’s dead.)

“’Oh, Mother come, and make my bed.
Oh, make it soft and narrow.
For my true love has died today.
And I shall die tomorrow.’”

To me, the subtext is that Barbara doesn’t believe the young man is that much into her, and also she can’t believe he’s dying of a broken heart. For some reason, he’s trying to trick her. She goes home, thinking that she’ll see him again. Yet, she loves him and in all versions, she anticipates dying – or actually dies – when she learns of his death.

In many versions, they are buried together, and a rose springs from one heart, and a briar from the other, and form a love knot over their graves.

The Eight Ladies and other people from Romancelandia would recognize this as the Stupid Misunderstanding trope. If only the two people had talked honestly with each other, nobody would have had to die. But also, we wouldn’t have the song.

On the third hand, people lie when they are in relationships. It could be the sad case that Barbara has more grievances against her lover than just being slighted during a toast, and/or he’s too sick on his deathbed to defend himself.

I think if Barbara Allen wrote into r/relationships on Reddit, they’d tell her to dump him. If she can’t trust him when it looks like he’s on his deathbed, he’s probably Not The One.

And our young man? Jemmy, or John Graeme or Sweet William? If he wrote into Reddit for advice? They’d probably tell him to see a doctor, hit the gym and look for a new girlfriend. There’s a fundamental lack of communication there that neither one is willing to address, and it would be better to move on.

But maybe it’s neither of their faults. Maybe some sweet troubadour witnessed an outbreak of the plague. He sees the young man die after a visit from the young lady, then the young lady dies, and our wandering minstrel’s overactive imagination filled in all the blank spaces and voila! A story for the ages.

Anyway, we still have half of May. It’s against the Center for Disease Control’s advice to go strolling in the park without a mask, but we can use our imaginations to take a trip, and maybe surprise ourselves with a pair of roguish eyes . . . in the merry, merry month of May.

2 thoughts on “Michaeline: For the Love of Barbara Allen”