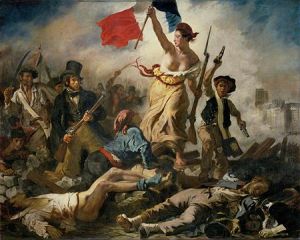 I struggled to find a topic to write about this week, and I decided to go with an old chestnut idea: find out more about an unknown literary figure who was born on today’s date. Initially, the only person I could find was Anna Robeson Brown Burr, whom I located on some wacky web site. She was a wealthy socialite, married a wealthy socialite, wrote books, volunteered at the library, and died at age 68 of pneumonia.

However, her obit ran on the front page (!) of the Chester (Pennsylvania) Times of Sept 11, 1941, which was fascinating, although (full disclosure) I read and catalogued 18th-century newspapers for my research grant when I was in grad school, so I admit I might have a stronger-than-usual interest in old newspapers.

In any event, Sept. 11, 1941 was before the United States entered World War II, of course, and the front page was full of war news. But there was a lot of news about polio, too.

Poliomyelitis, or “infantile paralysis” as it was called back then, is caused by a very contagious virus that invades the central nervous system. Although it’s thought that the polio virus has been around for thousands of years, at its peak in the 1940s and 1950s, polio paralyzed or killed more than half a million people worldwide annually, creating a medical crisis without cure. Primarily affecting children and young adults, polio could be relatively minor, or it could result in severe permanent disability.

The Sept. 11, 1941 issue of the Chester Times reported that no new cases of infantile paralysis had been reported in the Chester area that day, but to curtail the epidemic:

It just sounded so eerily familiar. 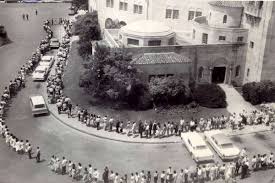 In 1952 alone, there were 58,000 new polio cases reported in the United States, with more than 3,000 deaths. But on March 26, 1953, American medical researcher Dr. Jonas Salk announced on a national radio show that he had successfully tested a vaccine against poliomyelitis, and by 1955 people were lining up to get it.

Today, polio has largely been eradicated. So here’s hoping that scientists find a vaccine for the corona virus soon, as well.

And what about Anna Robeson Brown Burr, you ask? Yeah, still not that interesting. And upon further exploration, also not born on May 7.

You know who was born on May 7 and was interesting? Olympe de Gouges (born Marie Gouges May 7, 1748 in Montauban, Guyenne-and-Gascony, France). She was a playwright in the early 1780s and became politically engaged, fighting against the slave trade in the French colonies and advocating for women’s rights in the Declaration of the Rights of Woman and the Female Citizen (1791), in which she challenged the practice of male authority and the notion of male-female inequality. (She wrote, “A woman has the right to mount the scaffold. She must possess equally the right to mount the speaker’s platform.”) She was executed by guillotine during the Reign of Terror on Nov. 3, 1793.