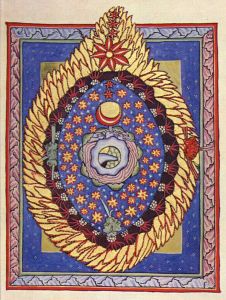 The Universe from von Bingen’s Scivias, showing the feminine nature of the universe. There are stars and moon and divine fire. (Image via Wikimedia Commons)

In times of trouble, I find looking at Maslow’s hierarchy of needs to be a useful filter. Essentially, it ranks human needs and wants into a pyramid. The theory used to be that if the needs at the bottom of the pyramid aren’t fulfilled (for example, one doesn’t have enough water or can’t breathe), the higher needs and wants can’t be realized (cooperation with others, for example, or creative pursuits).

Current theory, according to Wikipedia, allows that these needs and wants may be overlapping. I think, also, there’s a gray area. You can achieve top-level goals like creativity without fully enjoying the needs and desires of the lower levels. Of course, you need food and water, but you don’t need brownies and milk. You may need a degree of safety, but your mind can trick you into thinking you are in imminent danger – in return, you can double-trick your mind into thinking it’s fine with a safe and secure writing area. 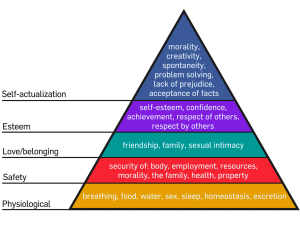 Maslow’s pyramid, or hierarchy of needs, make our needs and desires seem cut and dried and stacked. It’s a little more complicated than that, and we can also imagine deprivation when we are used to certain luxuries. Bread and water can seem like a feast or a famine, depending on where our starting point of reference is. (Image via Wikimedia Commons)

Let me give you a couple of examples of creativity achieved despite a technical lack of fulfillment of the lower needs.

Sex is at the bottom of the pyramid as a basic need, but famously, monks and nuns have created without it for centuries. Hildegard von Bingen, a 12th century mystic, composer and writer as well as abbess and healer, talked about the Church being the bride of Christ. My great-aunt, who was a nun with the Adorers of the Blood of Christ, wore a wedding ring to signify her marriage to Christ. So, while there is no sex here, there is a cognate – a religious connection and passion that is compared to marriage and consummation.

Also, fasting has been considered a spur for creativity. Chris Martin, the lead singer for Coldplay, said in a 2015 radio interview that he fasts for one day a week. He said that the fasting brings forth a “joyous feeling” – I presume after the fast is over. He’s honest about the “hangry” feeling that he says hits late in the day. One reporter for People magazine tried the one-day-fast-per-week, and mostly talked about her annoyance with the program, but concluded that she could see the spiritual and physical benefits. 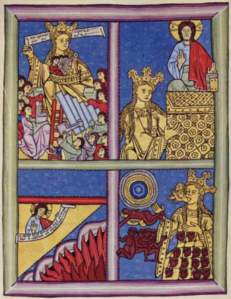 The upper left drawing from von Bingen’s Scivias shows the Church as the bride of Christ. (Image via Wikimedia Commons)

I’ve had brief flirtations with food reduction plans. They aren’t actual fasts, but they cut out sugar, processed grains and sometimes even meat and fruit. Is there anything more difficult to eat than a two-carrot smoothy? It seems like it would be a good idea, and the first cup goes down OK – but the last cup is pure torture – trying to overcome the grainy texture that tickles the throat as it goes down, and eating it anyway because this is the last food for the next three or four hours.

I am useless during a modified fast, but when I finally get to eat carbs again, I hear angelic choirs. I believe cutting out sugar and white flour (which converts quickly to sugars in the body) helps reduce inflammation – my fingers felt a lot more nimble after a recent no-carb trial. A modified fast makes me appreciate food on a deeper level, and that can extend to other areas of gratitude. If I was feeling deprived and lacking in the basics before a fast, a true deprivation makes me realize how much abundance I have.

Does it result in solid, creative output? LOL, not so far. I have a list as long as my arm regarding my shelter needs (actually shelter desires) that I want to tackle before I sit down and write. (Although, if a fast makes me appreciate some of the basics, maybe I should go out camping for a weekend in a tent, and see how that changes my outlook on my home.)

But to return to my dear friend Maslow, I think a lot of us are feeling quite insecure as to our basic needs these days. We may worry about the food supply for ourselves and our neighbors. We may hate our homes if we’ve been sheltering in place for too long, or mourning a loss of our extended “territories” (perhaps our workplace, perhaps a favorite café or restaurant that we call our own). When we feel deprived, it’s difficult to be in the mood for writing. But if the true basics are being met, we can create a feeling of plenty and abundance with our imaginations – after all, we are writers, and this is something we CAN do.

What do you really need to write today?

One thought on “Michaeline: What We Really Need Right Now”