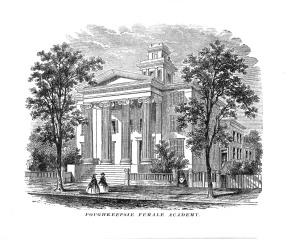 Poughkeepsie: Where the ideas come from. (Image via Wikimedia Commons)

The last month has been an extremely creative time for me, but the general unsettled zeitgeist means I feel like I should be doing things other than writing. So, I decided to share some of my ideas that are going to waste. Feel free to execute them as you like, or add your own fun story ideas for people to pick up and share. Just make sure you have a protagonist, an antagonist, and a conflict. Or, provide half of the equation, and let people in the comments fill in the rest. You can add frills like the inciting incident, the time and setting, cool ideas and supporting characters.

*When asked where his ideas came from, Harlan Ellison said he would reply, “I get my stories from an idea service in Poughkeepsie, New York . . . $25 a week and they send me a fresh six-pack of new ideas fifty-two times a year.” – Shatterday: Stories, by Harlan Ellison

STORY IDEA #1: Amelia Hamsterkaufe, Miss North Carolina 1972, is now a suburban widow at a party in 1980 for her best friend (and runner-up) Betsy Hill’s birthday. Betsy breaks the news that she’s going to divorce her husband, Rex, and marry a scandal-ridden senator that she’s loved for the last ten years. Amelia absorbs the news under the moonlight on the patio, when she’s interrupted by Rex, who she has had a secret crush on since 1971. They begin to bicker about Betsy’s decision to divorce Rex, when a passing asteroid falls in the pool, and sends them both back to 1972 with their knowledge of the future, and a chance to change everything.

STORY IDEA #2: Vanessa Emerald, heiress to Dippums fortune (the reconstituted chip that’s fun to dip), drives a bus through a pizzeria during a wild bachelorette party. Miraculously, nobody is hurt, but the pizzeria owner, Jay Fontana is livid. He’s got two months to make his business a success or his backers will demand repayment of his loans. She’s got to prove to her distant father that she can make enough money to cover all of the damage she’s caused in 60 days, or she’ll lose her inheritance to a cat orphanage. Together, over their shared love of food, they develop an amazing new pizza, and find themselves falling in love.

Ideas disappear if you don’t capture them. (Image via Wikimedia Commons)

STORY IDEA #3: Swamp biologist Serena Patrick discovers a new sentient Spanish Moss in the depths of (some swamp). She and her team discover it’s got flu-busting antibodies when ingested or breathed in . . . but then they also discover that they have to share their minds with an altogether alien sentience that seems bent on world peace for Spanish Moss at any cost. And it doesn’t sound half bad, actually.

Ugh, and that’s all the time I’ve got to sit down and write today. Hope your writing and dreaming are doing well! (Note, some writing coaches suggest listing your ideas until you run out — and then listing a few more. About the tenth idea, you start to run into some really interesting scenarios, they say.)