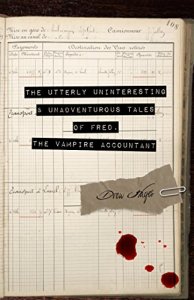 *The Utterly Uninteresting & Unadventurous Tales of Fred, the Vampire Accountant* by Drew Hayes. (Image via Amazon US.)

I’m not a huge fan of vampire stories, but it turns out I really like the ones where Everyman (or Everywoman), the unspectacular and messed-up mortal, gets turned into a vampire. There’s just something about that juxtaposition of cool immortality with lingering mortal uncertainty that really interests me.

I loved the first few MaryJanice Davidson’s Undead series with Betsy, Queen of the Vampires – in the first book, Undead and Unwed, a former Bridget Jones-type gets thrust into the Vampire lifestyle after an accident. And What We Do in the Shadows is a sweet movie about vampire “sharehouse” in Wellington, New Zealand. (I’m referring to the 2014 film; I didn’t know about the 2019 TV series until now. See? Blogging has some great side benefits!)

Now there’s another vampire world I can add to my list: I just read The Utterly Uninteresting & Unadventurous Tales of Fred, the Vampire Accountant by Drew Hayes and had a lot of fun!

All three of these vampire universes share characters who are very much aware of the vampire tropes, and how they (as vampires) turn tradition on its head. They don’t want to be evil bloodsuckers, and their main focus in life isn’t their next meal, but trying to “live” an undead life with a degree of comfort – and they want to be better people.

Fred is particularly aware in many ways that he’s part of the Vampire Story. He thought he’d turn into a suave and effortlessly cool vampire after waking up under a dumpster drained of his blood, but he’s disappointed to find he’s still him – socially awkward, fussy and alone.

Fooling around with the tropes is what makes the book a lot of fun, and from the beginning, Hayes is teasing the reader. His tone is prissy Victorian, his first-person POV proclaims from the title that his adventures are not worth paying attention to . . . and then boom! Within a few chapters, our Fred has a love interest and is being chased by werewolves.

The story-building creates a world quite familiar to people who grew up in Middle America, and Fred is a wry, self-deprecating character who vows to give impulsiveness a try – but ever practical, he adds a caveat: “. . . as impulsive as a vampire with four clean pairs of clothes and a four-day supply of blood can be.”

I really enjoyed the four-stories-in-a-novel structure, especially since I’ve been having a very busy January, and I couldn’t finish book all in one go (and I wanted to! But reading e-books on my computer means I’m wary of falling asleep in the middle of a story at 2 a.m. and crushing my laptop). I haven’t checked this out, but it reads like the four stories were originally published or shown to people separately, so there’s some re-hashing of “what went on before” at the beginning of each adventure. The mini-infodump can feel clumsy when it’s still all in your short-term memory, but probably is very helpful when you take a long break between stories.

Also, there are some instances of the writer not covering his tracks. For example, at the beginning of Adventure the Second, Fred is riding around in a truck with sun-proof glass – apparently just so he can take a daylight road trip. The glass doesn’t show up again in this book, and he doesn’t install any in his apartment. In a couple of instances, Hayes plays with the Long Villain’s Monologue trope with great success – but sometimes, the trope catches Hayes unaware, and he loses track of where his characters are and what they are doing – some of them are frozen in place by authorial convenience while a character monologues, and sometimes Hayes freezes them in place with a magic spell before carrying on with the Monologue.

These are little quibbles; the fun and adventure, and Fred’s growing community of warm, likable friends carried me through straight to the end, and I’m very pleased to report that the second book in the series is highly rated, with one reviewer proclaiming it even better than book one.

*A note about the girlfriend – this is a romance blog, and I feel really weird putting the love interest as a footnote, but here’s the deal. She’s charming, kickass, and Fred really appreciates her for all sorts of reasons. She even gets to narrate a couple of chapters. Hayes has done a good job of creating women characters – and male characters, as well. Upon reflection, the male characters outnumber the women characters, but I can’t say I’m not guilty of that in my own writing, so I won’t complain. I didn’t notice it until I got to this point in the review. It’s a sweet romance with a happy ending (or rather, a happy To Be Continued).

And I’ve got to say, if you know a Certified Public Accountant in real life, or perhaps if you are one yourself, this book has got chuckles aimed directly at you. It’s not often you can say that about a book. My sister is going to love this one!

10 thoughts on “Michaeline: Review: From the Moderne Vampyre Genre”