Probably most of us following this blog started our reading careers in a library. I know I did. I worked in a few, too. They were cool places in the humid summers of the American Midwest. Libraries in California, where I live now, struggle for funds to stay open. Thanks to a local referendum that passed with more than 2/3 majority, my main library is now open 60.5 hours/week, and my local branch is open 28 hours/week, a gain of 12 hours over previous years. Thank you, fellow taxpayers!

So it was with interest that I read in The New York Times about what libraries are doing to attract and keep patrons. The amenities some of them offer almost (or absolutely) overshadow their book collections.

For example, the new Central Library in Austin, Texas, has six floors and 200,000 square feet of space. Its reading rooms are wrap-around porches overlooking Shoal Creek and Lady Bird Lake. There’s a giant chess set outside. Users can check out seeds from the seed library and plant them at home, or play with new gadgets they don’t yet (or might never) own in the “technology petting zoo.” They can create their own model on a 3D printer or record a song on a Spire Studio. Sounds great, right? 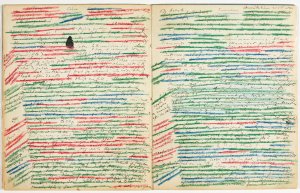 This page from the first draft of Ulysses by James Joyce is on display at the Museum of Literature Ireland. That’s some serious revision!

Dublin, Ireland, created an “old” library, the Museum of Literature Ireland. The original home of the University College Dublin, where many of Ireland’s most famous writers studied, these Georgian buildings opened to the public for the first time in September. Visitors can see the old physics theater where James Joyce set a chapter of his A Portrait of the Artist as a Young Man and the original print of Ulysses (famously called copy number 1), as well as the intact bedroom of poet Gerard Manley Hopkins. The museum’s radio station broadcasts 24/7 for academics, musicians, and writers to stop in and talk about their work.

The Helsinki Central Library Oodi has received more than 1 million visitors in its first year.

For a modern take on what libraries can and should provide its patrons, check out the Helsinki, Finland, Central Library Oodi (open 100 hours a week, let me point out, to more than a million visitors in this, its first year). Costing 98 million euros split 2-1 between the Helsinki and federal governments, only one-third of the 185,000-square-foot space is allocated to books (transported by specially designed robots); the rest is community space.

The “book heaven” on the top floor has potted trees and specially commissioned wool carpets. The second floor hosts an urban workshop with sewing machines, scanners and printers, and laser cutters and soldering stations, with spaces allocated to sewing, making badges, and even playing the drums. Entrepreneurs can rent out work stations to meet with colleagues or clients. 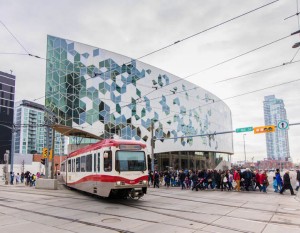 Maybe best of all, the Central Library in Calgary, Canada, has a train running through it. The site was designed to accommodate an active Light Rail Transit Line, and the lobby is an arched bridge that lets locomotives go under it. Patrons can sit on swirly chairs and watch them zoom by all day. On lower floors the library has two cafes, a teen center, a children’s space, and a 320-seat theater. The highest floor is the Great Reading Room, which has no signs on the walls asking for silence.

The Times says these new mega-libraries are tourist attractions, and while I’ve always found books to be a library’s main draw, I wouldn’t mind checking out a few of these. What about you? Do you have a library, and do you use it?

6 thoughts on “Kay: Lost in Libraries”