At the beginning of November, I received comments back from my developmental editor. This was the first time in six years of writing that I’d gotten far enough to 1) finish a book, and 2) submit it to an editor. When I got her comments–which included a letter with general recommendations as well as detailed line edits throughout the MS, plus a 1.5 hour Skype call–I sat back and processed everything she threw at me before making changes, and I’m glad I did.

But once I was done digesting, how did I figure out what to use and what to keep? I listened to my gut.

I say “usually” because sometimes (really…rarely) there’s a compelling reason for me not to. If that’s the case, I’ll brainstorm with my critique partners to see if there’s a way to make a different change that remedies the problem or issue they pointed out. In general, though, if more than one person (or my gut and someone else) suggest something or point out a problem, I try to fix it.

For the most part, the things she suggested were either faults I was already aware of, great additions to the story, or fixes for story problems that had been rubbing me the wrong way, but I had no idea what to do. There were some changes that didn’t sit well with me, either because it would mess up my ending, because of the way this story fits in with the other five books I have planned for the series, or because I just didn’t like what she had to say. That’s where listening to my gut was helpful. One change she suggested would have resulted in me pretty much rewriting most of the book. Not only did my gut say, “Um, NO,” it would have been a ton of work to make the change. Oh, don’t get me wrong…there have been lots of changes she’s suggested that required a ton of work…but the difference is that my gut said they had to be done.

Initially, I was afraid that I wouldn’t know what to do with the comments I got back from my editor, but I have to say that so far, my gut has known what will work and what won’t.

What lessons have you learned when working with an editor? Any sage advice you can offer other writers about what to expect?

Now Available for Pre-Order on Amazon! 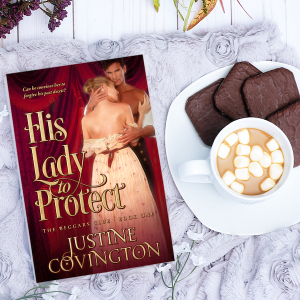 He’s promised to keep her safe. She doesn’t trust him. Can he convince her he’s not the man she thinks he is?

Seeking redemption for a ruinous past, Nate makes a promise to protect his best friend’s sister, Susannah, from her traitorous uncle, even if it means marrying her. But can a marriage of convenience stay that way with a woman he desires…and is falling in love with?

Susannah cannot possibly marry Nate. The man betrayed her by leading her brother to his death. It doesn’t matter that she used to love him. But can she continue to hate him if her heart—and body—can’t forget the way he once made her feel?

Determined to keep his promise, Nate must learn that to earn trust, one has to give it. And Susannah must accept that not everything—or everyone—is as it seems. But will those lessons come too late?

Buy His Lady to Protect to read the first in an exciting new series centered around six friends from Eton and set in the infamous Regency period.

And as an extra, be sure to check out the FREE PREQUEL to Nate and Susannah’s story, available here.

2 thoughts on “Justine: Being Judicious When Reviewing Editor Comments”