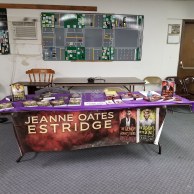 On Saturday I attended a book-signing at New and Olde Pages, a local bookstore, in honor of Independent Bookstore Day, where I sold seven books. That may not sound like much, but it’s twice what I’ve sold on Amazon in the past week, including my KU reads. (On Sunday I had to suspend my “trickle” ad when the trickle became a flood thanks to Christmas shoppers who apparently clicked on my ad only to remember that they weren’t shopping for themselves. Since the Zon charges per click, this is the worst possible outcome. Like many other authors at this time of year, I had to suspend my advertising.)

For an author with only two books on the market, selling seven books in an afternoon is a very nice result. It wasn’t especially profitable, because I bought books from two other authors there (of course), but it was an enjoyable afternoon of chatting with potential readers. It was also, for an introvert, insanely stressful. When I got home I walked in the door, ordered up a drink (it’s lovely when your husband is also your bartender) and proceeded to binge on Spider Solitaire while listening to the soundtrack from Hadestown for a couple of hours while I unwound.

(If you’ve never heard Why We Build the Wall, it’s absolutely haunting.)

As I write this post on Sunday morning, though, I’m largely recovered from the ordeal of talking to other human beings and I think hand-sales is something I need to pursue more aggressively in 2020. I believe in my books. I think they’re funny and thought-provoking, with unique and compelling characters. And when I talk to people face-to-face, this comes through persuasively.

So one of my goals for 2020 will be to approach independent bookstores and ask if they’ll take my books on consignment (or order through Lightning Spark). There are only a couple of Indies here in the Dayton area, but there are more in Cincinnati and Columbus. I also plan to approach the local library systems and see if they’d be willing to stock it.

Which means I’ll need to talk to people again.

Is 9 a.m. too early to start drinking?