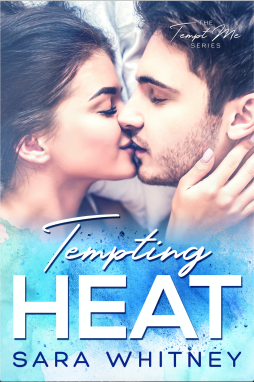 An unexpected upside to becoming a writer is that I find myself reading books written by friends, and friends of friends. I love seeing people I know become debut authors and then go on to build their lists. There’s something thrilling and insider-ish about being part of their adventure.

Here on 8LW we’ve shared the excitement surrounding the publication of Jeanne’s Touched by a Demon books and Nancy’s Harrow’s Finest Five series, and we’ve enjoyed interviews with some of Jeanne’s fellow Golden Heart alumnae. This week was another first for me: the debut of Sara Whitney, one of my Golden Heart classmates.

Tempting Heat is a contemporary second-chance romance novella set in Chicago, with the two main characters stranded in forced proximity during an epic snowstorm. I really like those tropes. Second-chance stories raise the emotional stakes quickly because the characters already have shared baggage for the author to play with, and forced proximity adds extra pressure because the characters literally have nowhere to go—they have to face Whatever Went Wrong first time around.

An unexpected downside to becoming a writer is that I find it hard to lose myself in a book. My inner editor starts offering critique and before I know it I’m assembling a list of things I’d tweak or change or rewrite instead of enjoying the story. So I was ridiculously happy to find myself immersed in Tempting Heat, sharing Finn and Tom’s long-overdue reconciliation-cute.

The story starts when Fiona (Finn) discovers a half-awake, hungover Tom emerging from her flatmate’s bedroom some hours after said flatmate departed to deal with a work emergency involving a weekend-long trip to Las Vegas, and just as a gigantic snowstorm shuts down all transport options. It’s the first time the two have met since they graduated from high school. They were classmates and close friends—Tom was the brainy best buddy to Finn’s quarterback boyfriend—and they were this close to becoming something more until the Big Misunderstanding happened. Finn was humiliated and chose to move on and reinvent herself at university, leaving Tom feeling hurt, angry, misjudged and full of regrets.

Both Finn and Tom are smart, likable and sympathetic. She’s a marketing professional, he’s about to earn his Ph.D. She’s a planner, he’s spontaneous. They find themselves in an awkward, highly-charged situation and attempt to deal with it like adults, but of course it isn’t long before their shared past finds its way into their snappy exchanges. The dialogue is excellent and the emotional intensity builds as they exchange confidences and finally share the honest conversation they should have had back in the day. I love that although the physical attraction between them is there from the first page, they deal with their emotional baggage first. The steamy scenes were really well-written—just to my taste, with subtle language choices and a nice combination of emotional and physical detail.

Normally I’d have been irked by the idea that they could have avoided eight years of angst by discussing the Big Mis at the time, but here I gave the characters a pass, partly because I understood Finn’s reaction but mostly because they were so young. Not many teenagers have the emotional maturity to set their hurt aside and analyze a mortifying experience. Toward the end of the book they almost make the same dumb mistake again and that made sense too, weighing eight years of misunderstanding against two days of revelations and reconciliation. This time they got over themselves and seized their second chance, which convinced me that they had a longer-term future together.

My only real criticism was that some of the important plot points turned on coincidences. I didn’t mind the one that kick-started the story, but there were others, from the Big Mis to the timing of other events. It didn’t bother me as I was reading though.

I’m pretty sure I spotted some excellent sequel bait in the novella, and equally sure that I’ll read the other books in the series when I’m ready for another warm, feelgood interlude. I’m excited to see what Sara writes next.

How about you? Read anything good lately?