This is the Smith-Waite Tarot Deck (Centennial Edition) in a tin. It’s a very traditional deck full of tarot symbols. (Image by E.M. Duskova)

I created a tarot spread to help spark a new story for National Novel Writing Month, and I thought I’d share it with you. The spread is quite simple. The left side represents my protagonist, the right side my antagonist, and the bottom concerns the plot point.

1. This is the heroine of my story. The seven of cups suggest many choices. The Waite-Smith Little White Book contains the keywords of: fairy favors, imagination, through a looking glass. Also, with that many cups, I thought my heroine might be a bartender. And because my imagination is a little perverse, I thought a tee-total bartender would be a lot of fun to write.
2. This card represents her goal, or the overlying theme of her existence. Bad news, censure or conflict are the key words for the eight of swords. She’s bound by a lot of different ties. (To be honest, this is a difficult card to work with in the position of “goalz!” It suggests a heroine with no agency – which is a constant problem with my work!)
3. This card represents her motivations, or the underlying theme of her existence. The wheel of fortune’s key words are fortune, success, felicity. But my intuitive interpretation is that she’s got no agency, and is at the whim of Lady Luck. It ties in quite nicely with Card 2, but this isn’t the sort of heroine we are supposed to be writing! She should be active, not reactive. She should chart her own destiny, not just coast by under a lucky star.
4. This is the hero, or the antagonist. I’m really fuzzy about the difference between hero and antagonist in a romance. Often, the hero and heroine tend to join forces and become one protagonist, trying to beat the bad guy. I choose to see this as my hero. Look at him: Temperance is an angel! He’s god-touched in a way that parallels her luck, but comes from a different direction. You don’t have to answer to Lady Luck, but you do have to answer to gods. The key words tell a slightly different story: economy, management, frugality. (And at this point, I realize my reading is starting to resemble Jack and Olivia – Jack is a beautiful frost god who must learn to be temperate because he’s just lost his powers. We’re not supposed to write old stories for NaNo!)
5. His goal or overlying theme of his existence. The Emperor is a mature man of reasoned judgment. The keywords are stability and protection. Good goals! Grow up, little boy.
6. His motivations or underlying theme of his existence. Reversed nine of pentacles/coins. He’s lost his garden, his value. Keywords: roguery, deception, bad faith and voided projects. Well, he is a voided project. And roguery has served him quite well in the past; it must be tempting to keep being a sly dog and avoid problems instead of face them head-on – and that also provides an interesting contrast to the temperate angel of Card 4.
7. Ignition point: first conflict that starts the story is defined by the King of Wands. A lizard king, a guy in charge is making trouble, and may be the true antagonist of the story. Keywords: a countryman, generally married, honest and conscientious. Interesting – this could be a villain who is not a villain.
8. First turning point: Seven of pentacles. (How does this tie in with the hero’s fault, the reversed nine of pentacles?) Hard work leads to a good harvest. Key word: treasure. So, in some stories, there’s a point where everything is going right. Things are really working, and coming together. It’s usually a bright spot before a horrific fall.
9. Second turning point: Reversed three of cups, and this looks like a dark night of the soul. All joy is drained out.

This isn’t the only reading. If I need more advice, I can pull cards at any time to help guide the action, new characters, or new events. But in generally, I feel that if the story isn’t writing itself after the second turning point, it’s probably got some major problems earlier in the story. 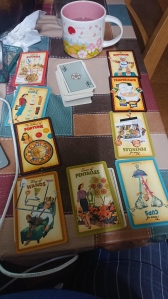 The Housewives’ Tarot drags a 50s sensibility into the 21st century. Women are the heroes of this deck, and the symbols make a lot of modern references. (Image by E.M. Duskova)

To add extra information, I placed the same cards from a different deck over the Waite-Smith cards. It’s really amazing to see the variety of tarot cards out there these days. I think the internet makes it easier to share, and also is inspirational to tarot creators. I’ve seen a cat tarot that’s positively hedonistic. And there’s a very interesting wild-life tarot called The Wild Unknown, which brings animal associations to the mix. I chose The Housewives’ Tarot, which is a sassy, stylish deck that reflects the kind of story I’d like to write: fun, full of verve, and woman-based.

The cards are the same, but The Housewives’ Tarot adds or even changes the information I get. For example, even though The Housewives’ Tarot doesn’t offer reversed advice, I can see that in Card 6, the dishwasher is broken. Chaos reigns because a fundamental tool is out of commission. Also, the reversed three of cups offers a different perspective: from one cup, two are formed. Do my hero and heroine come from the same place, thematically? Or is it that my heroes and my villains are basically the same, but take two different paths?

At any rate, I’m sad to report that my Brand New Story didn’t pan out. I wrote about 1,200 words, and the juice just wasn’t there. On the plus side, it’s offered a glimpse into an old story – and it’s interesting that my mind goes to my old story instead of glomming onto this information to create a new one. Even a detour can be useful in the writing game, so we’ll see what happens.

8 thoughts on “Michaeline: A Tarot Spread for a NaNo Writing Prompt”