This is the home of authors Stephen and Tabitha King in Bangor, Maine. (AP Photo/Robert F. Bukaty, File)

Now that we are in the month of NaNo, many of us are hunkered down, grinding out a daily 1,667 words letting our imaginations take flight in a concentrated, one-month writing extravaganza.

You can maybe tell this is not my thing.

However, I am deeply attracted to the idea of a writers retreat, where people can go and maybe write or maybe just cogitate or brainstorm. I like the idea of getting away from daily life, a healthy disruption that removes us from our routines and can jar those neurons into bouncing in new directions.

So here’s a retreat I’d like to try: Stephen King spends most of his time in Florida these days, so he’s turning his house in Bangor, Maine, into a research center and writers retreat. The city recently rezoned his place so that it could run as a nonprofit, and research opportunities will be by appointment only and not available to the general public. So far there’s no word on how to apply to become one of the five lucky visiting writers—evidently the retreat itself is still probably a couple of years down the road. But it just seems like the writing vibes would be incredible there. Not to mention the house. Check out the winged creatures on the gate. 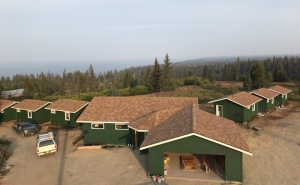 Construction of the Storyknife facility in Homer, Alaska, is almost completed.

And here’s another interesting-sounding retreat: Dana Stabenow, one of my favorite mystery authors, has built Storyknife, a nonprofit womens writing retreat in Homer, Alaska. Applications opened Nov. 1 (and will close Dec. 31); one-month and two-week residencies run April through October. There’s a $35 application fee and you have to get to Homer on your own, but once you’re there, your stay is free. You stay in a small cabin, make your own breakfast, and share dinner with the other residents. Sounds like fun!

I like the idea of writers retreats so much that I’ve even thought about staring my own. My name doesn’t have the same cachet as Stephen King or Dana Stabenow, but it seems like as long as there’s a NaNo, there will be people who need to sit down somewhere quiet and focus.

What about you? Do you like to get away to write?