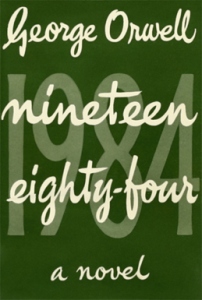 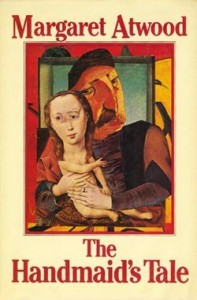 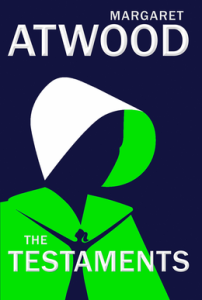 In preparation for Margaret Atwood’s new book, The Testaments (officially released Sept. 10, 2019), I re-read two classic dystopian novels. I finished George Orwell’s 1984 on Sunday, and Atwood’s The Handmaid’s Tale on Tuesday, then read right through The Testaments (the sequel to THT) on Wednesday.

That’s a whole lot of dystopia, folks. Fortunately, I survived the experience unbowed.

Orwell’s 1984 is THE fright novel about totalitarian systems. His vision is broad and deep, and his prose (generally) is economical and delivers its truth bombs with great precision. This is the book that gave us doublespeak, Big Brother and a clear way of talking about the rise of totalitarianism – in fact, he infodumps two chapters of a pretend totalitarian how-to manual in the last third, and it’s still a page turner. It’s not recommended for folks who need a happily-ever-after – Orwell’s book is bleak, and the only happy ending is death, and the government is stingy with even that.

I read The Handmaid’s Tale in high school, a year or two after it came out in 1985. The parallels between 1984 and THT are there, but Atwood looks at dystopia from the women’s point of view. The US government is overthrown by an evangelical faction, and women suddenly lose all their electronic money, the right to work, and most other rights, as well. They are segregated into Wives, baby machines and domestic workers, with some women being multi-purpose “Econowives” and all excess women sent to dirty and dangerous “Colonies” to clean up toxic waste. (Unless they are killed outright.)

It was a fascinating book, and horrifying. In high school, I read a lot of horror – Stephen King was one of my favorite authors – but this was horror in a new way. I could see how people like Tammy Faye Bakker (wife of Jim Bakker, a popular TV preacher who guilted people into contributions) were becoming mainstream; I could see the hypocrisy of Phyllis Schafly, who told other women that their place was in the home, as she went from city to city lecturing. Women were better off than they had been, but still struggling against glass ceilings and discrimination in the workplace. Atwood’s world did not seem 100 percent inconceivable.

I never thought I’d read that book again. It was frightening and scary, and some of the imagery lasted more than 30 years. I’ll never forget the loveless procreation, where the handmaid (according to Biblical precedent now made law in Gilead) lay between the knees of a Wife while the man of the household rutted until his business was done, and hopefully, the handmaid was impregnated. Hopefully? No, that’s almost entirely the wrong word. Hope in this world was something rationed, like the food, the clothing and the sex. Hope was just as likely to be a bedsheet tangled in an overhead chandelier.

However, I’m glad I read it again, because it’s a different book when read from the perspective of a woman with savings, who has spent much time working, who is beyond her reproductive prime. It’s still horrifying, but the details are so well-observed that you can forget about the horror for a little while.

And, it has an ambiguous ending that could be happy if you were the optimistic sort. I’ve always been optimistic.

THT was ahead of its time, and really, very little has changed in the relationship that this book has with our present day society. We don’t live in Gilead, despite everything that’s been happening. Not yet. But it’s still scarily possible that we could slip into Gilead.

The Testaments don’t really expand on that vision of horror, but rather, it explores the ramifications more deeply, through the recorded stories of a young woman of Gilead, a young woman from free Canada, and an old woman (my age, maybe) who holds an important position of power within this patriarchy. You can’t get rid of the women in any patriarchy, or you’ll have a very short-lived patriarchy.

I am pleased to report that there IS a happy ending. Atwood might be ready to write happy endings unambiguously, or she might maybe feels strong enough at this point in her long and renowned career that she can end a book in the way the book wants to end. Or maybe she’s just sick and tired of unhappy endings. It’s a far cry from Orwell.

And I feel if I say anything else, I might accidentally spoil things from either TT or THT. So, I’ll leave you to read the books.

But, as writers of romance and love, there’s a lot we can learn from Atwood’s books. There’s a lot of love, and it’s not easy love. It can’t be easy given the circumstances, but it can still be felt.

Second, women turn to humor to ease their troubles and burdens. And women are funny – with sharp humor that has been rewarded with muzzles and scold’s bridles in days gone by (when heard by the wrong parties). You can read the sense of humor in so many of our Ladies’ published works; we know how effective it is as a tool for truth and to ease some of love’s pangs.

Atwood also makes a point that there are always flowers. In real life, I think there are many men who are as attuned to the changing of the flowers; surely Mr. Collins, dolt that he is in Jane Austen’s Pride and Prejudice, surely even he knows what lilac’s bloom means, and feels deeply when the lilies scent the whole garden with their heavy fragrance. We don’t see that in Austen’s books, but women are allowed to talk about flowers, and assign all sorts of metaphors and hidden language to the botany.

So, even though we live in times where we can find dystopia in the pages of any news site, even though reading fictional dystopia seems like pure masochism, I think it’s worthwhile to read The Testaments. There’s hope inside those pages, and maybe the warning will be enough to keep us from sliding into Gilead.

6 thoughts on “Michaeline: Making the Best of a Dystopian Timeline”