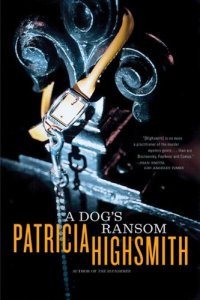 I’ve been catching up on reading as I recover from surgery, and I picked this book to read next because I like mysteries and our Lady friend Marie mentioned that she’d read a Patricia Highsmith. I thought I’d see how A Dog’s Ransom, the book I have, holds up.

First, let me say: Patricia Highsmith. This woman can write psychological horror really well. She wrote Strangers on a Train, which was made into an Alfred Hitchcock film (two strangers on a train agree to murder each other’s’ wives) and The Talented Mr. Ripley (a man takes over another’s identity). I haven’t read all her books, but I’ve read these two, and they are both very unsettling. Random acts spin slowly out of control, events spiral downward without anyone able to stop them, bad things happen to good people, the crooks go unpunished—it’s like that, on Every. Single. Page.

In this book, a beloved dog, which has taken the place of a deceased only child in the affections of a kind couple, is lost during an unleashed walk in the park. In fact, a sociopath kills it. The sociopath asks for a ransom. The couple pays it. He asks for a second ransom. A well-meaning young beat cop gets involved. And then—as if we didn’t know this would happen—everything takes a turn for the worse. And doesn’t get better.

I don’t want to say anything more about the plot for fear of spoiling the development, which is so important in a Patricia Highsmith novel. The tone and mood are dark and compelling, your eyes are riveted to the page, even though you don’t want to turn for fear of what will happen next. If that’s your catnip—this book, and all of Highsmith’s work—will be right up your alley.

If you haven’t read any of Highsmith’s work, I suggest you try it. Graham Greene said she creates a “claustrophobic and irrational [world],” The New Yorker said her novels are “peerlessly disturbing,” and Gore Vidal called her “one of our greatest modernist writers.” They’re right. You might be sorry you tried her, but you won’t be disappointed.