This week, I’m sorry to say, I’m a bit overwhelmed and a bit under the weather. While I don’t have the energy or mental focus to write a new blog post, I thought I’d share this one that I wrote two years ago, in which I discuss how stories mold our minds and attitudes, and can ultimately change the world.

How Story Shapes Our Brains

How long did the last fiction book you finished stick with you? What about the romance or mystery or classic you read over and over again as a teen? How about the books your parents read to you before you were old enough to read on your own? Turns out, the fiction we read might just be making us more engaged, empathetic humans according to researchers studying the brain through magnetic resonance imaging (MRI). We’ve known this for a while now.

In a New York Times article published more than five years ago, Annie Murphy Paul reported: “The brain, it seems, does not make much of a distinction between reading about an experience and encountering it in real life; in each case, the same neurological regions are stimulated…Indeed, in one respect novels go beyond simulating reality to give readers an experience unavailable off the page: the opportunity to enter fully into other people’s thoughts and feelings.” Wow, heady stuff, you authors out there.

I’ve been pondering the power of story a lot lately as I’ve realized just how many of my foundational beliefs have their roots in Dr. Seuss stories. I have very clear memories of dragging my hard cover book of Fox in Socks with me everywhere I went for some period of time when I was around four years old. Because I had the great privilege of visiting the library often (thank you, Mom!), I can’t remember how many other Dr. Seuss books I owned versus borrowed. And because I was too young to make the connection between Dr. Seuss TV specials, which were a VERY BIG DEAL back in the days before internet access to content, DVRs/VCRs, and even before cable TV itself, I can’t be sure which stories I absorbed through that medium.

What I do know is that my three all-time favorite Seuss stories say a lot about what is important to me. 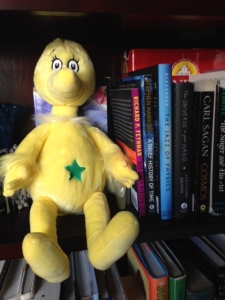 The Sneetches takes top billing in my list. In the story, some sneetches have green stars on their bellies, some don’t. The star-bellied sneetches decide they are the superior beings and treat the starless sneetches badly. An enterprising capitalist shows up with a machine to put stars on the bellies of the starless. Still wanting to discriminate, the starred sneetches have their stars removed. The frenzy of starring and unstarring continues until the sneetches are out of money and they are no longer sure who originally had a star and who didn’t. They realize that underneath bellies with or without stars, they’re all sneetches.

Quoting from Wikipedia, this story “…was intended by Seuss as a satire of discrimination between races and cultures, and was specifically inspired by his opposition to antisemitism.” When I saw The Sneetches (because I have a very clear memory of watching the story on TV), I  thought they were the most adorable things I’d ever seen, and I was thrilled when they all became friends in the end, regardless of their differences. Did I relate it to differences between races and cultures and denegration of the ‘other’ at that time in my life? Doubtful. But it did make perfect sense to me to care more about how a person acts and treats others than how s/he looks.

The second story on my Seuss greatest hits list is The Lorax. Seuss fans will remember this woodland creature’s famous line, “I am the Lorax. I speak for the trees, for the trees have no tongues”, when confronting the Once-ler creature who has stumbled upon the Lorax’s beautiful forest ecosystem and begun mindlessly thwacking down the trees to make needless stuff out of their colorful tufts. The first time I heard the Lorax’s sad tale of a destroyed forest, misplaced and possibly dying forest critters, and unchecked pollution, all borne of greed, a tree hugger was born.

Rounding out the top three is Yertle the Turtle. Yertle, king of the turtles, demands the other turtles stack themselves up so he can sit on top of them and see out over the world. Problem is, the other turtles are being crushed and living in misery. Mack, he turtle at the bottom of the pile begs the king to let them go, but the king ignores his request multiple times. In the end, Mack burps, which disrupts the pile and sends Yertle hurtling into the mud. The story ends with these lines: “Yertle, that marvelous he, is King of the Mud. That’s all he can see. And the turtles of course, all the turtles are free, as turtles, and maybe all creatures should be.” The message is pretty simple: those at the top with an undue share of power have no right to crush those underneath them.

If you’re why I’ve been musing about Dr. Seuss stories, it’s because I find my mind flashing back to these fun stories and their deep lessons a lot these days. Some of the scariest things happening in the US right now involve removing environmental protections, demonizing ‘the other’, and proposing policies to widen the inequality between those at the very top and everyone else. When I hear something that seems truly craven to me, I can’t help wondering if the legislators taking these stances never read Dr. Seuss, if their brains were deprived of the important messages that got hard-wired into mine at such an early age.

Like so many creatives these days, when events of the day become too much, I take solace in my work. I’ve always been an active participant in my country’s democracy (to the point that I raised a daughter who has gone into politics), and I’m more engaged than ever now. But some days are hard. Change is slow and seems like it might never come. The tide is high over our heads and just might drown us. When I’m in a particularly bad place, I sit at my keyboard, dig deep, and reach for honest things to say in my stories that I hope will resonate with readers. I’m putting my beliefs, truths, and hopes on the page, not in a didactic treatise, but in the thoughts, words, and actions of my characters.

The majority of the world’s most influential figures can point to books that helped shaped their world views. Harper Lee’s seminal novel To Kill a Mockingbird is credited with advancing the civil rights movement. Dr. Seuss taught one kid (and no doubt countless more) from a very homogeneous, sheltered world to believe in the equality and inherent worth of all people, no matter their differences. Your book could influence minds and hearts in ways you can’t even imagine. Write on, friends, write on.

“Things that feel impossible now are possible…Things will change…What we write in this room creates conditions for that change, the conditions that will change hearts and minds.” – Donald Maass, presenter, WU Un-Conference 2016

Anyone else tending toward overwhelmed these days? If so, how are you coping? Are you able to take solace in story, either making or consuming it?