There’s a new Twitter marketing strategy that caught my eye recently. List a bunch of tropes that describe your book, and then add the links for purchase or preorder. 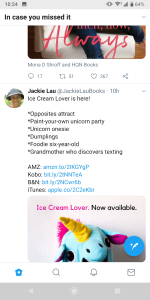 Jackie Lau caught my attention with the ice cream, and the foodie six-year-old was a joy, and not just a plot moppet.

I haven’t seen this before, but then again, I don’t get around much, so maybe it’s a thing. Maybe everyone is doing it, and I just haven’t seen it before. But . . . it looks like a really good idea, and I’m going to pretend that you are as in the dark as I was.

I first noticed when Jackie Lau did it for Ice Cream Lover. Jackie just showed up suddenly on my phone Twitter feed, and I was in the mood for ice cream and romance . . . and that’s how I ended up following her. She had me at ice cream; add in an #AsianRomCom, and I bought her book. And boy, it was good! Ice cream, sexy scenes of the like I’ve never seen in romance before (do note: I don’t get around much), a bi-cultural heroine and
just plain good writing.

Mimi Grace’s contemporary romcom has a great cover, and this list prompted me to look further — I liked the sample she posted on her blog, so, now “July 17” is on my calendar to check Kindle Japan. (If I get any updates on the Kindle situation, I’ll post in the comments.)

As a result of following Jackie, the Twitter algorithm sent me nearly identical tweets. Mimi Grace writes contemporary romcom like Jackie, although her first book, Along for the Ride, doesn’t come out until July. I like road trips, and I’ve seen some wonderful things done with “they hate each other” (I’m thinking His Girl Friday with Rosalind Russell and Cary Grant). And the sample pretty much sealed the deal – I’m putting the release date of Along for the Ride on my calendar.

(I would have pre-ordered from Amazon.co.jp, but much weirdness is happening there. These days, when I put an English title into the search box, it translates it into Japanese and can’t find anything. Then, I have to press the “undo” button, and voila! But in this case, voila turns into WTF? “Along for the Ride Mimi Grace” turns into “sling for the ride mini grace” . . . and of course, there are no results for that. YOU folks in North America can probably pre-order the ebook with no problems. It’s probably a pre-order thing.)

Three times is the charm, and I saw that Joanna Shupe also used the same technique, but with a different genre, namely 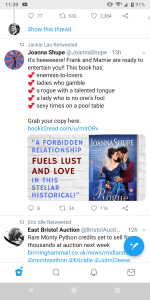 Joanna Shupe’s The Rogue of Fifth Avenue packs a whole lot of good information in the title — historical, a cad and a bounder headed for redemption, and New York City — I’m guessing during the Gilded Age, but definitely 19th century judging by the cover. The list promises smart characters: ladies who gamble have to be people smart and know how to calculate a percentage, while a talented tongue probably means both a wit and someone who is fun to go to bed with.

historical romance. What I like about this book is in the title: The Rogue of Fifth Avenue. Rogues are my jam, and I love New York (is there any other Fifth Avenue in Romancelandia? Perhaps there is, but I think I’m on the money here, despite not getting around much). But in addition to the title, the list o’ features offers some pertinent information that helps my buying decisions. (Pool table sexy times? Yay!)

So, what do you think about this marketing idea? It looks deceptively easier than a blurb: lists are easy, right? (LOL, well, no.) And I like the colorful emojis Mimi and Joanna used. It’s very well suited to Twitter, as well.

Have you seen these lists in the wild, and have they been effective in persuading you to check an author out further? Do they also appear on Facebook? I wish I knew a little more about the history of how this technique came about, and how it’s spreading. Tell me more in the comments!