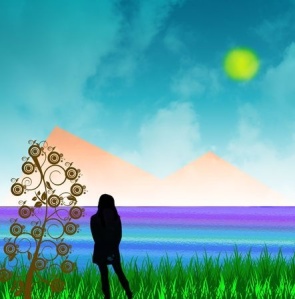 I know it’s a holiday weekend and the sun’s shining, but is anyone up for a quick game of world-building “what if”?

As regular readers of this blog know, I write fantasy. Stories of chivalry, rivalry, power, and love, set in a fantastic pre-industrial landscape. I love my weird, crazy world, but I’m currently working through developmental edits, and after some good discussions with my editor and beta readers (thanks, Jeanne and Kay!) I’m looking for ways to make my stories stronger. In particular, I’d like to find a few well-chosen details to amplify the fantastic feel of my world.

I write a very practical kind of fantasy. My stories have powerful jewels, miraculous golden beans, sinister talking rocks and uncanny, mystical monks, but all my otherworldly elements are solidly rooted in the everyday. I don’t have dragons or spells or magical woo-woo. What I need is to identify ordinary things that would be natural and useful in my world, but which would not be found in a regular historical story. Small details that don’t drive the plot but that would support and enrich the world of jewels, beans, rocks, monks etc.

This week, I think I found something useful hiding in plain sight. Do you know what apotropaic marks are? Me neither. Apparently they’re symbols or patterns scratched into the fabric of a building to keep witches out. They’re most commonly found in places that witches were thought likely to be able to enter a building, such as doors, windows, or chimneys.

I read this week that hundreds of witches’ marks have recently been identified at Creswell Crags, a system of caves in Nottinghamshire. I know those caves. I first went there as a child, around fifty years ago, and I’ve probably seen the marks. They were assumed to be graffiti until recently, when members of a charity called Subterranea Britannica recognized them during a tour of the caves. The marks are intended to keep evil spirits from coming through to earth from the underworld.

Click here to read the BBC report on the Creswell caves and see pictures of the apotropaic marks.

Told you about Creswell Crags to tell you this. In my fantasy world, local legends say the rocks beneath and surrounding the city of Caldermor can move, and talk, and do scary stuff if they get angry. As you might imagine, there’s more to it than that, though only a very few people know the truth behind the legend. I’m thinking that in Caldermor ordinary people would have any number of  superstitions or tricks to protect themselves or propitiate the rocks. Especially (say) the ones on which their homes were built.

Probably they wouldn’t use witches’ marks. If you think a rock might be alive and cranky, the last thing you’d do would be to take your chisel to it 😉 . But I think you’d do something to keep it quiet.

So what people would do to keep the rocks happy, or what other rock-related superstitions might they have? Would they build their houses out of wood or brick? Would they avoid walking over any place where the rocks broke through to the surface? Would they leave offerings at those places, or leave a safe space around them? Would the local women take turns to keep the rocks clean of all debris?

I think I’m on to something, though I’m not sure what. Still cogitating. Any and all (helpful) suggestions would be much appreciated!

21 thoughts on “Jilly: Rocks In My Head”