A “first draft” version of a quilt

No, we didn’t turn into an economics blog when your back was turned.  Today’s post is definitely about writing – honest!

One summer when I was about twelve, I made my first attempt at piecing a quilt.  I’m from a long line of crafty people, there were plenty of fabric scraps around the house, and I needed something to do during those loooooong hours when the library had the audacity to close.

Pink and green was a popular color combination at that time (don’t ask me why), so those are the colors I chose, making bigger blocks out of smaller blocks of a variety of colors.  Since I was using scraps, I ran out of some patterns before others.  Eventually the top was finished, some batting purchased for the inside, and a piece of fabric unearthed for the back.  I wasn’t exactly sure what I was doing, but I’d seen it done before and just sort of winged it.

The seams weren’t as straight as they could be.  I frequently forgot to check my stitch-width, so that varied quite a bit.  My squares could only be called “square” by the truly charitable.  Had my mother been making the quilt, she’d have taken apart the problems areas and made sure everything was perfect before moving on.  I am my father’s daughter, however, and his philosophy (besides “duct tape can fix anything”) was “if you step back and squint a little and it looks fine, then it’s fine.”  So I stepped back, squinted, and carried on.

The result was far from perfect, but it was a first try and it was good enough.  I learned a lot from that first attempt and later attempts improved.  The funny thing is that, all these years later, I still have that old quilt.  It’s served as a picnic blanket, been cuddled under at the drive-in movies, been a tent and a fort, been peed on (by puppies) and drooled on (by babies) and been useful in any number of ways.  And the fact that it was crooked and a little lumpy made no difference at all.  What mattered was that it was actually finished. 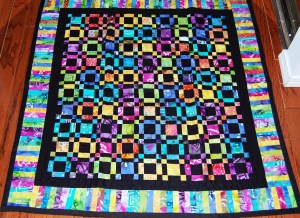 My skills improved over time

Fast forward now and, instead of my first attempt at piecing a quilt, I’m in the midst of my first attempt(s) at finishing a book.  I have revised (multiple times) drafts of three books:  a Regency, a Contemporary, and a Mystery.  I’ve been bouncing between the three of them for several years now.  Like my early quilt attempt, there are basic flaws – inconsistencies, saggy-middles, plot holes, and who knows what else.  Unlike that early quilt attempt, however, instead of stepping back, squinting, calling it “close enough” and moving on, I’ve been channeling my mother – picking apart the problem areas and trying to make them perfect.

Which brings me to the sunk cost fallacy.

A few weeks ago, my son and I went out for dinner at a local pub.  It was crowded, but there were a few empty tables so we waited by the “please wait to be seated” sign feeling optimistic.  The waitress caught our eyes and gave the “be with you in a minute” look as she passed by.  We waited.  She passed by a few times.  There were still empty tables.   We waited a bit more.  She avoided making eye contact as she passed by a few more times.  A couple of other customers arrived.  Still, we waited.  I looked at the time on my phone to see how long we’d been waiting (it felt like forever).  “Deciding whether or not to stay” my son asked.  When I said yes he said, “don’t get tricked by the sunk cost fallacy.” 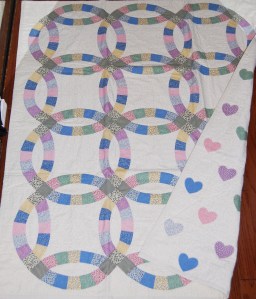 Totally not what I was expecting to hear, but a valid point nonetheless.  It would be normal, when deciding whether to continue waiting or not, to take into account the time we’d already spent waiting, but that’s the fallacy.  The time that was already spent was gone.  Whether we kept waiting or went somewhere else, that time would still be gone.  How long we might have to wait at a different restaurant had nothing to do with how long we had already waited.  The only real question was, “would the waitress ever actually make eye-contact with us again?”

That didn’t seem likely, so we left, went to a deli just down the road, picked up dinner to go, went back home, and ate while playing along with Jeopardy and Wheel of Fortune (we were virtual-winners on both!).  Had we been tricked by the sunk cost fallacy, we’d probably still be waiting to be seated.

So . . . What exactly does that have to do with writing, you may be asking?

The time I’ve spent on my three not-yet-perfected draft manuscripts is a lot like the time we spent waiting at the restaurant (just much, much longer).  It’s easy to get stuck in the “well, I’ve spent so much time working on these and all that time will be wasted if I stop now” mindset.  But whether I keep working on them or move on to the next project, that time is gone.  So I have two choices:  (1) keep chasing perfection or (2) call it a wrap, take what I’ve learned, and move on to the next story idea.  I’m thinking option 2 is the way to go.  After all, if I’d gotten stuck chasing perfection on that first quilt, there’d probably never have been a second.

Naturally, just when I’d decided it was time to move on, I saw an article in the New York Times about writer Anne Lamott, whose book, Bird by Bird, is required reading in many writing programs.  According to the article Lamott, at the age of 65, recently got married for the first time.  There was a quote at the end of the article that really stuck with me.  It was talking about finding a “lifelong partner”, but it felt like it could apply just as well to writing:

A natural cheerleader, especially for underdogs, she also posted this on her Facebook page: “Never give up, no matter how things look or how long they take. Don’t quit before the miracle.”

That really feels like a vote for option 1.  Or does that mean finishing the book will take a miracle?  More coigitating is definitely necessary.

In the meantime, what about you?  Are you a “work on it until it’s perfect” kind of person or a “I’ve spent long enough on this, time to