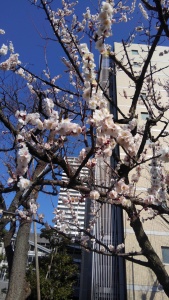 Plum blossoms in Saitama, a suburb of Tokyo. Nothing threatening about these luscious (and heady-scented) beauties! (Photo by E.M. Duskova)

I’m fond of the older phrase, “fodder for the story mill”, but it’s out of date. Fodder is feed for livestock. And the mill? I can ever decide if it’s a little device like a peppermill, or something big and automated like a flour mill. Both mills have that grind-grind-grinding action that is an essential part of digesting experiences before turning them into stories, but otherwise . . . it’s vague. And not nearly as snappy as “spank bank”.

“Smash cache”? Ugh. “Spew fuel”? Double-ugh. “Story store”? Hmmm. Better, but too close to things like “Boaty McBoatface”. (I do have to say, I could learn to love it. “Hey, gals, I’m going shopping at the Story Store today; want me to pick up some Ham and Tease Sandwiches?”

My goodness, I just feel like a Blank Tank today . . . not a creative idea ready for prime time.

You see, I’m in Tokyo again today. It’s the third time in the last two months; I’m sleep-deprived, my ankles hurt from walking, and any creative mojo I woke up with this morning was used up in figuring out the best apartment for my daughter who is headed for university in The Big City next month.

I’ve got to make one more trip – get her moved in, and with luck, I’ll get to see her entrance ceremony. A few more weeks of using my story-telling powers to tell a story about how we’re going to get two sets of futons and a set of dishes from IKEA to her apartment (navigating two trainlines, several city blocks, and three stories of building without an elevator). THEN, maybe, sometime in May perhaps, I’ll have my brain to myself again, and can think about writing in a concentrated manner.

In the meantime, I’m stocking the story store, I guess. Today was a beautiful day with plum blossoms blooming. I saw the lady realtor be firm but fair with the guy doing the electric wiring at the apartments (he’d parked badly, because someone else parked badly in front of him). An old guy selling us insurance for the apartment started looking up our home address on his phone . . . and the most peculiar look came over his face as he realized that we lived out in the middle of nowhere. I saw this plant that looked like a cross between a mother-in-law’s tongue and a spider plant, but the thing was at least 120 cm wide, and nearly a meter tall. (And I typo’d that as “120 meters wide” – or around 360 feet across. Now THERE’S a story idea! The mutant plant that did something in the suburbs of Tokyo. I think I’ll call him Seymour San-Dai-Me.) Damn, I should have gotten a picture of that . . . well, perhaps it’ll be more lurid in my memory.

Be creative for me. What do you call your file of story ideas?