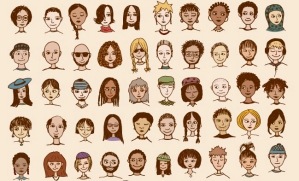 I had a different topic that I was going to post on today, but then I saw the latest survey results from the Ripped Bodice bookstore on the state of diversity in romance publishing and I got derailed.

For the past several years there has been an increased emphasis on diversity in romance fiction at writing conferences, on writing blogs (we had a series of posts on it last year), and in the mainstream media.  The issue was even brought front and center by several of the awardees at the most recent RWA conference I attended.

Early diversity efforts focused on getting writers to include more diverse characters in their stories.   One predictable result was an uptick in stories that had characters described as being of varying ethnicities but who sounded, acted, reacted, and generally moved through their stories as if their ethnicity was completely irrelevant, or alternatively, they were portrayed in very stereotypical ways.  Certainly there were and are authors do do a great job including/portraying diverse characters, but there is still more progress to be made.

Recent efforts have been focused on getting more diverse individuals writing and publishing stories and to increase the visibility of all of the great diverse authors and books out there waiting to be read.

Naturally, with all of that I expected this year’s Ripped Bodice survey to show that there had been a big  improvement in the state of diversity in romance from 2017 to 2018.

Sadly, I was wrong.

First, let’s start with some numbers.

In 2017 the Romance Writers of America commissioned “The Romance Book Buyer”, a study about romance readers.  It’s probably no surprise to anyone that, according to the study, 82% of romance readers are female, or that 86% are heterosexual/straight, or that 73% are white/Caucasian.  But that means that 27% of readers are people of color (PoC).

Think about the books you’ve read recently.  Were 27% of the characters PoC?  How about the authors?  What about the individuals featured on the book covers?  If your reading has been anything like mine, those answers are probably all “no” or “not very many.”

According to the recent“State of Racial Diversity in Romance Publishing Report” from The Ripped Bodice bookstore, 7.7% of books by leading romance publishers in 2018 were written by PoC, that’s up 1.5% from 2017, but it’s still lower than the 7.8% that were published in 2016.  That seems odd, since a whopping 80% of the 2018 Top 10 Bestsellers at The Ripped Bodice were written by PoC – an increase from 60% in 2017.

There seems to be a demand for diverse stories, by diverse authors, as well as a population of diverse readers, so where’s the disconnect?

What’s going on in publishing?

Although the lack in books by PoC continues to be more of a reflection of what is being published, rather than what is being written, there were some positive changes in 2018.  Some publishers showed good improvement in their percentage of books from PoC from 2017 to 2018.

Unfortunately the numbers for some publishers, like St. Martin’s Press, Gallery, and Sourcebooks moved in the other direction, and the Crimson Romance imprint, which was at the top of the list last year with 29.3%, was eliminated altogether by its parent Simon & Schuster, citing “changing consumer reading habits and the continual evolution of the marketplace.”

It probably doesn’t help that, despite a slight increase in diverse hiring, those that work in the publishing industry continue to be predominately non-diverse.   If you don’t have diversity in the people making decisions on which books to publish and how to position/market them, then it’s not unexpected that you’ll wind up with a status quo that remains stubbornly white, despite the changing demographics of our society as a whole.

So, what progress has been made?

During the 2018 RWA Conference there was a Diversity Summit attended industry professionals, RWA staff/Board members, members of RWA’s Diversity Committee, and other leaders within the organization who represent marginalized populations.  According to the RWA website, the purpose was to “share ideas, identify roadblocks, and reaffirm a commitment to fostering a romance genre that represents the wide array of authors and readers that love it.”

A lot of information came out of the summit.  If you are an RWA member, you can read the entire report on the RWA website, but let me summarize some of the highlights:

The bottom line of the Summit was, “only through combined effort of publishers, buyers, vendors, RWA, authors, and readers can we truly make a difference in growing a diverse market.”  I hope this leads to some real progress in the industry and that next year’s report on the state of racial diversity in romance publishing shows a big improvement.

So, what are your current thoughts on the subject?  Did you make any changes last year in either your reading or your writing to include more diversity?  Do you have any recommendations to add to our virtual “Diverse-To-Be-Read” list?