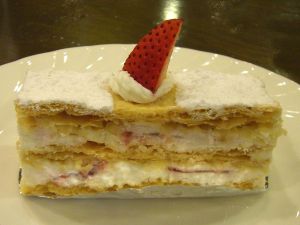 The many layers of a Japanese mille feuille (by Miya, via Wikimedia Commons)

Over the holidays, I binge-watched Riverdale, which is a live action reboot of the 75-plus-years-old Archie comics, and I loved it. I always love a good soap opera, because they are layered like a mille feuille, but Riverdale? Riverdale has layers in five dimensions.

First, artistically speaking, I was struck by the Twin Peaks vibe from the first shot. We open on the tragic drowning death of campus hero, Jason Blossom. In some ways, it feels like a prologue, but it is exactly where the season’s story starts. We’re given a gorgeous backdrop of river and mountains, somewhere near the Canadian border, and the stunning contrasts of all that summer green, and the Blossom twins’ pale skin and red hair. (Tone alert: Riverdale has Twin Peaks’ striking look, but there’s 50 percent less mumbo jumbo. The story references Twin Peaks as an influence, but it’s got better pacing, in my opinion.)

When I headed back to the DVD menu to click for my next hit, the episode names reminded me of old movies and short stories. Stuff like “Heart of Darkness” and “Faster, Pussycats! Kill! Kill!” I bet a reading/watching program of these references would provide quite an education in how to set up murderous fictional situations. But even if you’ve never read or seen most of these classics (and I haven’t), you’ve heard of them. They are in a million pop references, and you get it. It’s a little touch that re-inforces what you know about this series: it’s a pop rendition of some of the best of the twentieth century. That cult-hit vibe makes it even more cool and mysterious.

The next thing you notice is the stars. I’ll circle back to the younger stars in a paragraph or two, but the older stars? If you are a woman of a certain age, Archie’s dad (played by Luke Perry ((!))) and his mom (Molly Fucking Ringwold! THE red-headed sweetheart of my generation!) will provide all sorts of other feelings and memories. They don’t particularly revive past performances, but their baggage and emotional impact are lurking somewhere in the back of my mind, and adding extra power to their on-screen presences. This Refinery29 slideshow will give you some more background. (OMG? That was Robin Givens??? Yes, it was!)

The older characters add an extra dimensions to Riverdale. When I was picking up Archie Comics in the 1980s and 90s, the parents showed up in the story, and they often hinted at deeper backstory. But in the TV show, the rivalries and romances and hints of a long history really enrich the narrative. It also makes the feeling of a small town much more real.

The younger actors are more diversified than the already-slightly-diversified Archie comics cast of thirty years ago. Josie and all the Pussycats are black, and Josie’s mother is the mayor of Riverdale. Reggie is Asian (and phwaoar! to season one’s Reggie! I’m curious to see how the change-of-actors in season two changes the character’s presence). Veronica and her mother are Spanish-speaking Latinas. Archie is an all-American boy, but his actor is New Zealander KJ Apa, who is part Samoan. I didn’t know he was from New Zealand until I looked him up. But his looks . . . oh, you notice that right away. He’s a contrast to the elfin fragility of Jason Blossom (played by Trevor Stines). He’s got a darkness and a solidity that makes him more Alexander-the-Great auburn rather than King-of-Underhill flaming red. (See this teen-beat-style gushfest about Apa’s Samoan roots on Suga Magazine Online.)

I envy the writers a little bit. They are able to build on this amazing, time-tested (since 1941!) universe. However, they don’t coast on the established norms of the world; the mystery aspect jerks the whole Archie universe into a darker place, while keeping the friendships and frenemy status working to their narrative advantage.

Regarding the romance, I’ll note this: the Archie universe was traditionally known for teen fluidity. The love triangle between Archie, Betty and Veronica is the stuff of a thousand allusions. And it was supplemented with rivals like Reggie, or the “foreign exchange student”, or many others. The kids weren’t tied down. However, in the TV show, they tie Betty down fairly quickly to one guy, and while it’s a lovely relationship, I don’t see how they can regain that fluidity of teen dating without completely breaking someone’s heart.

Also, strangely enough, they unbalance one of the few stable relationships in the comics – Midge and Moose’s relationship definitely takes a twist. Kevin Keller (the first openly gay character in the universe, who debuted in 2010 in the comics and is played by Casey Cott) throws a wrench in Moose’s closet. I’ll be very interested to see how this all works out in season two (although, it’s such a side story that I might have to wait for season three).

This is the kind of thing I love: multiple characters with histories beyond the boundaries of the story interacting on different levels with love and hate. It’s the kind of thing that makes Jennifer Crusie’s Bet Me my favorite romance, and turns A Civil Campaign by Lois McMaster Bujold into my favorite book of all time (Lord Dono tips the balance . . . if Jane Austen had written fantasy/science fiction and included a Lord Dono character . . . well, that’s a what-if that will never happen. Bujold definitely carries the Austen banner, though).

Now, if only I had another winter vacation in which to binge the second season of Riverdale! Ah well, spring vacation is on the horizon. Maybe then . . . .

2 thoughts on “Michaeline: Welcome to Riverdale”