There comes a time in every story’s life when, in order to grow up into a book, it will undergo revisions. And just as my writing process has evolved over the years and tends to require variations based on the needs of each book, so too has my revision approach changed over time. One constant, though, is at some point, I need to look at the story differently by literally changing its appearance.

I’ve used the standard tricks over the years. Change the entire manuscript to a different font. Color code each POV or type of scene/action occurring. Print out the document in hard copy. For my current revision  project, I needed a new trick. Cue the music of worlds colliding as I realized I might have just the right tool sitting in the toolbox I used for my “day job” career.  In that career, I managed projects creating business proposals made up of multiple volumes of information, sometimes with hundreds of pages in each volume. These proposals had strict margin, font, and formatting requirements; included graphics, tables, and charts; and usually had page limitations per volume as well.

Teams would write, revise, and review the documents online, but by the time we got to our first round of document reviews and revisions, it was time to hang that puppy…er, proposal…on the wall. It’s such an industry-standard practice that companies with enough capital (and interest in investing in the department that brings in the business) install rails on the wall that are sized to slide 8.5×11-inch pages in and out of them. And it’s such an important step to get the big-picture visual of the proposal’s progress that if the CEO walks into a war room (the affectionate name for conference rooms where teams work on these projects) and does not see the proposal on the wall, someone in my position could get fired over it.

In other words, multi-billion dollar companies take this tool seriously.

I’m not suggesting there’s a lot of cross-over between what works for such companies and what works for novelists. I’m just willing to look far and wide for ways to get through the #E(*@+%! revision process. It’s that kind of thinking that gets you a wall full of a book manuscript and a spouse sleeping with one open in case you’ve really snapped this time. 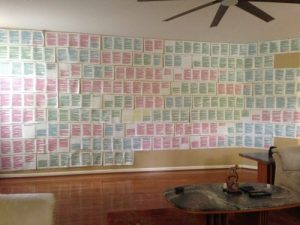 I had to move a sofa and take down some family photos, but redecorating was worth the effort!

But what’s really important, other than reassuring your spouse you’ll be fine someday when this revision is completed and you’re able to sleep again, is whether a tool works. And hanging nearly 300 color-coded manuscript pages on my family room wall worked for me. It helped me work through one of my biggest issues with this book. (Imagine a four-act romance story where the couple spend very little time together in act two and NO time together in act three. Yeah, I wrote that story.) I could very quickly see who (POV) and what (non-romance stuff) was happening, identify places to combine or dramatically edit scenes, and introduce new or revised scenes that feature our happy couple together on the page as if they’re, you know, working toward their HEA.

I learned a few other things in posting my pages on the wall as well. For instance, my average scene length is approximately five pages, which translates to 1500 words for me. It’s important that scene lengths vary to keep things interesting, but good to note when and why they do. When I saw the two- or three-page anomalies, I checked to make they were full scenes, self-contained units of conflict with stakes, changes, and realizations for the characters. For those that went longer – and some went twice as long or more – I confirmed the need for such verbosity. You’ll be shocked to know that some scenes went on a wee bit too long.

Max got all choked up at the ending. Or he sneezed on it. One or the other.

Also, in this story, our girl gets a little more POV page time than our guy. It’s not enough to be a problem, but something to revisit post-revision to make sure I haven’t thrown the balance between their POVs out of whack.

And finally, I learned that everyone’s a critic, including Max the cat. After I’d pulled some of the pages off the wall while I worked on certain scenes, Max removed several of the pages he could reach. I’m not sure whether that means he loves them, hates them, or just wants to see if they make fun crinkly noises.

The moral of this story is, don’t be afraid to try to new, different, and frightening (to those who care about you) tools to aid to your writing, revision, or other creative processes. And remember to warn those living with you before you do something drastic like wallpaper a room with your latest masterpiece. And, oh yeah, don’t let those cat critics get you down!

Have you ever hung a book (or chapter or scene) on a wall? What’s the weirdest tool you’ve used on a creative project?